Leaving The Somali People To Resolve Their Issue Themselves: The Only Solution 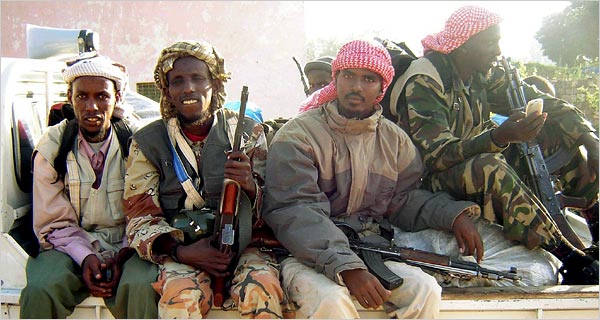 The invasion of the sovereign state of Somalia by external forces ingross violation of all international laws and principles is a shameful chapter in the history of the world that prides itself on its civilized lawsand principles and modern philosophies of human rights. The massacre, destruction and displacement of innocent civilians that ensued after the invasion that was carried out in clear violation of the principles of the right to self-determination and the rule of law are by fare one of the worst crimes on humanity in the 21st century. The outcome of the ill-devised invasion has so far been nothing but failure and embarrassment. For two years the world has seen and heard the news of war, turmoil and human loss coming out of Mogadishu. Having entered into a quagmire of fire to please its masters, the minority TPLF regime in Ethiopia is now in desperate search for a way out.

Realizing that they are immersed deeply in an inescapable quagmire, the quarters that invaded Somalia have been making attempts to divide and weaken Somali opposition forces in a bid to cover up their failures and shake off accountability for the crimes on humanity they committed on the Somali people. It is to be recalled that the ill-conceived so-called reconciliation attempts made by external powers in Djibouti had failed without accomplishing anything because they did not include the wishes and desires of the Somali people and their political forces.However, there is one fact that these quarters have been unable to recognize or refuse to recognize, i.e., the primary reason why the afore-mentioned attempts could not succeed is because the initiative was not taken by the Somali people themselves and its contents did not address Somali issues.

It is to be recalled that the Government of Eritrea had two years ago warned that the invasion of Somalia by the TPLF regime and the US Administration could only lead to an inescapable quagmaire and that it will entail dangerous consequences for the Horn of Africa. The Eritrean government had also pointed out that the Somali issue should and could only be resolved by the Somalis themselves. But the warnings fell on deaf ears and the illegal invasion was carried out. In their attempt to cover up the failure they sustained in their initial erroneous measure through the use of excessive military force, these forces have in the past two years committed gross crimes of humanity against the Somali people which history will never forget. The Somali experience in the past two years in particular and what the world has learned regarding the US Administration and their agents in general is that their tactic of trying to redeem one mistake by another is only a march forward to failure and destruction. Repeating in Kenya the failed attempt for so-called reconciliation in Djibouti is a clear example of the aforementioned fact.

Although the US Administration and the TPLF regime refuse to face facts as they are, their most formidable challenge in Somalia is the people’s own initiative for peace and reconciliation. Thus, it is clear that there is only one effective solution, i.e., to accept and respect the Somali people

’s choice without interference. The problem is a Somali problem and accepting the fact that it can only be resolved by the Somalis themselves would be a wise move. The only constructive role the international community can play is to encourage and create conducive grounds for the Somali people to come togther and deliberate on their differences, and more importantly to respect Somalia’s territorial integrity.

In order to reach an agreement, which violated the territorial integrity of Somalia, dangerous and conspiratorial engagements, coordinated by the US Administration and the regime in Ethiopia, were recently held in Djibouti and Nairobi. This adventurous attempt to balkanize Somalia and install puppet regimes that would serve US and Ethiopian interests, and the destabilizing effect is not hard to discern. This latest spectacle, more than ever before, has exposed the Ethiopian regime’s servitude.

Knowing that the 6 December 2006 Security Council Resolution 1725 explicitly forbids the deployment of forces from neighboring countries, the regime in Ethiopia, using the pretext of defending against a fabricated threat of terrorism from Somalia and the thinly veiled claim of an invitation by the Transitional Federal Government of Somalia(TFG), which is self-created, with full blessing and support of the Bush Administration and some neighboring countries, carried out its blatant war of aggression. The invading army finds itself in an intractable quagmire, and the worsening insecurity and suffering of the people of Somalia remains ignored by the international community.

At this time, contrary to its initial boisterous entry into Somalia, the TPLF regime now finds itself in an intractable political debacle and is emaciated by incalculable human and material losses. In order to cover up its utter failure, at times it tries to put the blame on the TFG, and at other times, providing empty guarantees for peace and stability, like relocating its forces from Mogadishu and other towns, deploying its forces close to the border area, and making false promises to intervene when necessary, using the fabricated threats of terrorism as an excuse, similar to the security agreement sought by the Americans in Iraq that gives the Americans the upper hand, is attempting to engineer a similar mechanism that will allow it political and military intervention in sovereign Somali territory.

The regime in Ethiopia unilaterally appoints and remove officials within the TFG, and in violation of the sovereignty and the right to self-determination of the Somali people has also gone to the extent of appointing cabinet ministers that would advance its own interests. This is unacceptable under any circumstance.

The Government of Eritrea, underlining that the Solution to eth problems in Somalia can only be ensured through the determination, choice and participation of the entire people of Somalia, is also certain that the conspiracies that are being weaved by Washington, with the servitude of the regime in Ethiopia, and facilitation of IGAD, is doomed to fail.

The unconditional withdrawal of the invading Ethiopian army and all other foreign forces from Somali territories is vital. There is no doubt that the people of Somalia will unravel the conspiracies that are being weaved and challenge them accordingly, as they have done in the past.

In openly launching aggression against Eritrea and Somalia, the TPLF regime had not only disrupted the peace and stability of the Horn region, as it had be entrusted by its masters to do so, but also plunged Ethiopia into an inescapable political quagmire. AS a result of its actions in carrying out its devious mission, the TPLF regime is now trapped in the tangled web of mounting popular opposition inside Ethiopia and strong legal challenges from the outside. However, instead of rectifying past mistakes and respecting the choice of the people and the rule of law, the clique continues to repeat mistake after mistake. Recently, the TPLF clique engaged itself in diplomatic and media campaign to blow out of proportion the nonexistent ‘conflict’ between Eritrea and Djibouti. It is quite obvious that the purpose behind this political game is to further delay the implementation of the EEBC’s final and binding ruling under the pretext of a fabricated ‘new conflict’.

Nonetheless, the people of the Horn region should be aware beforehand that the TPLF regime’s game of fire could only result in further chaos and destruction. Hence is should be emphasized that the people and Government of Eritrea will neither join in the charade devised to cover up the failed policies in our region nor will they be the sacrificial lamb for the devious machinations of alien forces.

Statement from the Embassy of Eritrea

At the Horn of Africa Conference VII