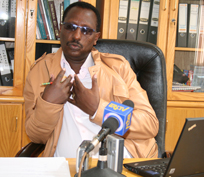 As the result of the concerted efforts made to build health facilities and equip them with the necessary drugs, equipment and skilled health personnel, access to primary health care with in 10 Km radius, increased from around 40% at the time of liberation to around 78 % at the moment. Around 60% of the population live with in 5 Kms from a health facility.
Shabait conducted an interview with Dr. Mismay Ghebrehiwot regarding the government’s ongoing efforts to provide better health care for everyone and the achievements registered so far. Excerpts follow: If you could start by giving us a general picture of the health sector at present?

The key pillars of any health system are the construction of physical infrastructure equipped with appropriate technology and medical supplies as well as the establishment of effective policies and procedures supported by well trained human resources. As is generally known the Eritrean government has since independence invested heavily in the health sector to ensure the provision of equal and comprehensive health services in all parts of the country. As a result of such political commitment, we can say that a tangible progress has been made in this sector in terms of both the distribution and quality of services.

How much progress has been made in the distribution of health centers and number of health technicians?

The basic policy as regards to health centers is to have a universal coverage as much as possible. As the result of the concerted efforts made to build health facilities and equip them with the necessary drugs, equipment and skilled health personnel, access to primary health care with in 10 Km radius, increased from around 40% at the time of liberation to around 78 % at the moment. Around 60% of the population live with in 5 Kms from a health facility.

Today we have 25 hospitals as opposed to 16 during independence. The increment in this number might not seem much, but not all 16 hospitals in 1991 were functional, thus a lot of effort and investment had been made in renovating and reviving those hospitals. This figure of hospitals also includes the referral hospitals on regional level.

Commendable progress has also been made as regards to the number of health technicians. The ratio of doctors to population that was 1:37,000 in 1991 is now 1:15,000, which puts us on track to achieving the 1:10,000 ratio recommended by the WHO. Efforts are ongoing to increase the number of doctors, nurses, pharmacist and other health technicians through training in the different schools and colleges opened in various parts of the country. This is one aspect of the multi-sectoral approach I had mentioned earlier.

Eritrea’s efforts to combat and eradicate preventable diseases such as malaria, measles , and others as per the Millennium Development Goals have been recognised internationally. Can you give us the basic facts regarding this?

Yes, the achievements registered in eradicating preventable diseases and reducing the mortality rates caused by them are indeed remarkable. By 2007, Eritrea had reduced the mortality rate caused by malaria by 80%, and measles is no longer a major threat in infant mortality. Our greatest success in this case is perhaps in the fact that the immunization of children has been inculcated into the culture of the people. Mothers no longer need health technicians to tell them that their babies have to be vaccinated, they already know at which month intervals a child needs to be vaccinated.

What about the progress made in neonatal and maternal health care?

This is one of the most important aspects of the provision of health services. Considering the fatality rates that occurred as a result of both the lack of access to proper health care and harmful traditional beliefs in 1991, the Ministry of Health has for the past 17 years given particular focus to this issue. As part of the overall endeavours to improve the healthcare system, the provision of maternal and neonatal healthcare has also greatly progressed. Not only have we been able to provide easier access to health care for mother but we also continue to give training to traditional midwives so that even those delivering at home could have better care.

The provision of affordable medicine is a crucial part of the overall healthcare system. What has been done so far to ensure the availability of affordable drugs in all parts of the country?

Yes this is part and parcel of the whole health care system. Giving a patient a proper diagnosis of his illness would be useless if you cannot provide him with the necessary drugs. Our primary objective is to ensure the availability, affordability, safety, efficacy and quality of drugs as well as promote rational use by consumers. I think we have come a long way in this respect and as of 2003 there is a 95% availability of essential drugs nationwide.

Natural Way is the New and Right way”