Zeri-Senay Tadese – The ‘Blessed Seed’ of the Nation 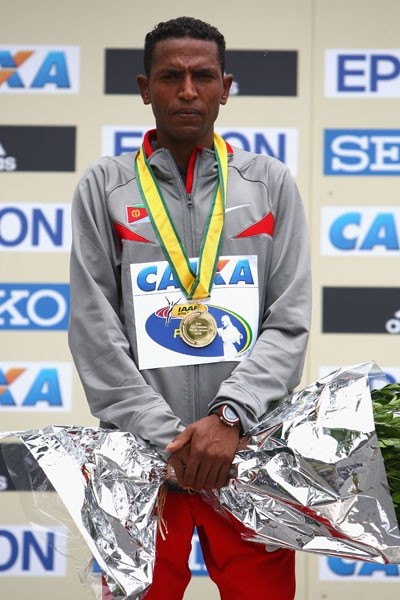 As it is widely known in Tigrinya language sayings:–  A [meaningful] name leads to glory -So did Zerisenay’s name. If we divide his first name into two, Zeri-Senay, it would mean  ‘a blessed seed’. Is he not? Athlete Zerisenay Tadese] Eritrea’s Olympic Bronze Medalist and World Championships Silver medalistThe most prolific Eritrean athlete who single-handedly lifted his country to world rankings in the field of athletics wins everyone’s heart at home. His day-to-day excelling performance made him appear as a living legend.
His popularity in Eritrea is believed to be more than that of David Beckham in Britain. Humbled by his major Athens Olympics bronze medal victory in 2004, which is first of its kind for Eritrea and himself, he recently added silver medal in the Berlin World Championship 2009 in 10,000 meters, which is again Eritrea’s first World Championship medal. His matchless journey in the cradle of athletics that hit the roof in Eritrean sporting history has driven his fellow citizens to follow him in leaps and bounds.

Family Background: A Blessing in Disguise

Zerisenay Tadese was born in Adi Bana, Debarwa subzone. He came form a family of seven children. He has four elder and two younger siblings out of which five are boys. Like most Eritrean villagers, he grew up grazing, plowing and herding with bare feet since he was ten years old. Hence, he had to struggle for a living since his childhood. He retained this style of living standard from his father Tadese Habtesilasie and his mother Luchia.

“We had lots of sheep and cattle, maybe, the largest in number in the village. So when my father took them all for two or three nights far away to wetter and greener places, we had to take care of the farming field. In those days, my mother used to work hard like a man and I started plowing at the age of 10. I guess the hardship of those days is playing great role in my current career. A great athlete comes out of a hard life. So my former life in the village is a blessing in disguise for me at the moment.”

Zerisenay, is a role model for youth athletes in Eritrea and a pioneer for his family as well. After he took up his running career successfully, his brothers Kidane, Maekele and junior Merhawi followed him on the running field. Maekele’s and Kidane’s first international competitions were world mountain championships. It is a field where Eritrea and Italy dominate from the world. Zerisenay’s younger brothers took part at different years and were personally quite successful. Their performance helped Eritrea stand on the podium. But it is junior Merhawi Tadese that Zerisenay laid his eyes on as a future threat. Zerisenay believes Merhawi has yet to hone his talent to be a great contender.

“Merhawi is only 16 and I am surprised at his pace while training or racing. He’s already taller than me and his physique is captivating. He is also fully concentrating on running which could make him a budding athlete. Keep an eye on him!” big brother advices.

“My Love for Sport Didn’t Come Through Running”

No matter how hard life was for Zerisenay, his love for sport was deep within him. But running was not his favorite one. Cycling was what he used to love and participate in.

“I used to follow biggest cycling events that were taking place in Asmara through radio Dimitsi Hafash while I was in Adi Bana. I had a dream to be like those famous Eritrean cyclists – Yonas Zecarias (Halabay – the milkman), Senay Tsegay or Even Zecarias. They were the talented Eritrean cyclists whose names I used to hear mentioned repeatedly on the radio.”

“Although Yonas Zecarias and SenayTsegay were from two rival teams, I liked them both without knowing their faces. In fact, I only saw them once in my childhood when they raced in Mendefera. I escaped from my village and headed to Mendefera to see the competition for the first time. The cyclists

were running so fast that it was not possible for me to study the faces of my ‘idols’.”

“I remember, at that time, Senay Tsegay lagged behind for a certain reason and I became very angry,” adds Zerisenay.

“Now I can say I am like a friend with my former heroes. We sometimes chat or have tea since we both are from sports family. So I have to say my love for sport didn’t come through running.”

Zerisenay recalls how unimaginable it was to ask his father to buy him a racing mountain bike, back in 2001. It was natural for his father to complain about its price at first. But later, looking at his son’s unquenched interest in cycling, his father bought for him a bicycle. Soon, Zerisenay started racing. He headed to Mendefera (about 15 km away from his place) and started racing. But he raced for only six weeks.

In the first five weeks, he was promising enough amongst the comparatively experienced Mendefera riders. In the sixth week, however, he was exceptional. He overlapped all the riders with great strength and controlled the racing field all for himself. He grabbed the biggest cycling victory in his life, kicking all his contenders out of the competition. Sadly, this was not a welcome development for the cycling organizing committee in Mendefera. As a result, he was banned from racing there. Instead, he was told he can only race in his subzone, Debarwa, where there was no fierce competition.

Zerisenay had to leave aside his love for cycling since there was no way for him to get back to cycling. In early 2002, while Zerisenay was in a dejected mood, a school teacher named Fitsum came to his classroom and asked for students who can run well to represent their school in a competition. Zerisenay did not volunteer. Nor did he know his running talent. However, he was covering a total of 32 km daily from his home to school and from his school back to his home. He had to run fast through the forest for 16 km early in the morning to attend his class and return the same distance back for lunch. In addition, in the afternoons, some farming activities would wait for him. Too hard for a boy his age!

At that moment, one of his classmates who noticed Zerisenay’s fast pace while playing football and running from home to school every morning, raised his hand and spoke about Zerisenay’s running capability. The teacher, without another word, invited Zerisenay to race in a 3km school competition the day after. The unwilling Zerisenay was dumbfounded; but had to obey the teachers order. The next day, he took part in the competition for the teacher’s sake and became a surprise winner. Sometime later, he represented his school Tera Imni and raced in another 3km competition in Debarwa Subzone.

“At that time, I remember an already professional Eritrean runner named Tecle Mengisteab, who used to go to Germany for international competitions, lined up with me representing his school as I represented my school in the subzone competition. I was surprised to beat him just in my second competition. I stood first beating him at the finish line and Tecle followed me for a second place,” remembers Zerisenay.

About four months later, Zerisenay proceeded in another qualification round. It was a competition held for the whole Debub Zone athletes in Adi Keih. Zerisenay did not take part in 3km. Instead, he jumped to 12 km.

“I jumped from 3km to 12km because I knew nothing about running. I had no running shoes. I put on a football shirt and cycling shoes that were big and quite uncomfortable for me and jumped from short to long distance race never knowing its effect. I stood 2nd following the then famous athlete Gaym. Gaym was much experienced than me and psychologically beat me even before the race began.”

“Two months later, I qualified for a national competition. I met Yonas Kifle, one of Eritrea’s first Olympians, in the competition for the first time in my life. I stood third following him and Tesfit Berhe.”

In such manner, Zerisenay accidentally joined the field of athletics. In 2002, after he took part in Massawa half marathon championship and stood second next to Yonas Kifle, he realized that he could be a good athlete. His short time achievements in running granted him a chance to compete in the 2002 Dublin World Cross Country Championship, his first international competition.

“I have to say as a novice athlete, I didn’t even know such races kick off by a gun shot. With the sound of a gunshot, all the professional athletes dashed like a bullet so swiftly. But I set off late almost behind every athlete. An experience I will never forget! Anyhow, I’m proud to have stood 30th in that Dublin race which was my first ever international cross country competition.”

He is also a third IAAF World Road Running Champion, where he joyously felt like the whole of Eritrea was running with him in October 2007 in Udine. Indeed, the whole of Eritrea celebrated all of his unprecedented victories. His Udine victory was followed by Rio de Janeiro Road Running Championship on 12th October 2008. He claimed a predictable victory for the third time consecutively with a dominant performance in the IAAF / CAIXA World Half Marathon Championships.

He became the first person in Eritrean sporting history to win an Olympic medal in 2004 in Athens when he took bronze medal in the 10,000 meters beating Ethiopia’s Haile Gebresilasie. Such pioneering achievements have become his habit as he became the first athlete to win gold medal in the 10,000 All Africa Games in Algiers 2007 for Eritrea. He is also the first Eritrean athlete to win gold medal in World Cross Country Championships in Mombassa, beating five-time world cross country champion Ethiopia’s Kenenisa Bekele who dropped out after Zerisenay had left him behind late in the race.

So UniqueAfter his historic victory in Mombassa World Cross Country Championships in 2007, Zerisenay underwent physiological tests and was found he required less oxygen per kilometer than other elite distance runners did. A report published in the British Journal of Sports Medicine suggested he was the world’s ‘most efficient runner’.