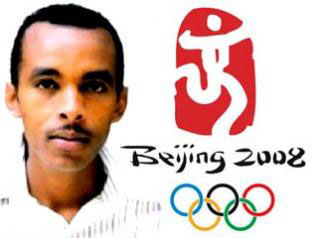 [Yared Asmerom] I became an Olympic marathoner in Beijing 2008. I am not afraid of dreaming big dreams. With my little experience, I set out to Beijing to stand on the podium with an Olympic medal.
A Journey of Four Years

From Scratch to an Olympian!

I was born as an athlete on New Year in 2004. Four years later, I became an Olympic marathoner in Beijing 2008. I am not afraid of dreaming big dreams. With my little experience, I set out to Beijing to stand on the podium with an Olympic medal. My technical errors in the last few kilometers did not allow this dream to come true, though. However, I comfortably stood 8th. It was all God’s will.

Early one morning in December 2003, I remember I was in my military camp when my commander summoned me for ‘some kind of work’. But I wasn’t really needed for work as I soon found out. On the pretext of ‘work, he wanted me to participate in a military athletic qualification competition without my knowledge. When I knew where I was being taken, I refused to take part in the race. Looking at my day-to-day military exercise, my commander knew I could make it. But I didn’t. Neither did I recognize the potential that was within me.

Falling out with my commander, I returned to my camp. I guess the idea of running for a competition made me feel lazy. A friend of mine named Daniel was not happy about the action I took at that time. He had good knowledge about athletics. Looking at my physique and general energy, he used to persuade me to start running as a professional since 2000, an advice which I completely ignored. Four years later, at about the beginning of the year 2004, when I got a call by my commander, my friend was astonished. When I declined that call, however, he was surprised and blamed me. He begged me to take part in the competition once again. I thought of it for a moment and settled my mind. I finally said I was ready for the competition. My reconsideration was quite a relief for all my friends.

I automatically took part in a 5,000 meter race without any training or racing kit. But hurrah! I became a surprise winner stunning everyone in my first ever competition. My friends were the happiest of all for the astonishing result I achieved. They found a good reason to substantiate their trust in me. I was proud of them the way they were proud of me.

That victory rang a ‘wake up call’ in my mind. I knew I could advance for further and greater achievements if I quit some of my addictions and focus on running. I used to smoke and drink before I stared running. But then, I worked hard on it and succeeded in giving it up.

I jumped for another 10,000m race and won it as well. Before I jump to another advanced competitions representing my unit, I decided to train with Debub athletic club in Adi Keih. I was welcomed cordially by the members and got in a task of shaping myself and getting fit as soon as possible. I used to wake up as early as 5:00am and wait for the Debub athletic club runners at the gate in a shivering weather. They were so much more experienced that it wasn’t easy for me to catch up with their pace at first. But, I did not lose hope. In just two weeks time, I started to match their experienced performances, which was quite an incredible moral boost for me.

My next competition was a 21km big military event where some of the country’s well known athletes participated. It was my first half marathon race. I stood third following professional athletes Teclemariam Mered and Gebru Sereke. The race covered the Segeneity-Deckmhare route. It took me 72 minutes. Considering the high altitude and its up hill roads, I said, ‘not bad for a starter’. Of course, Teclemariam and Gebru beat me with more than four minutes. On my second half marathon trial I run along side Zerisenay Tadese, Eritrea’s Olympic medalist, to lower my time to 67 minutes in Massawa. My third half marathon trial was much fruitful as I made it to 65 minutes.

So far, one of my best achievements is my Olympic 2008 marathon competition. In August 2008, I was once again proud to stand 8th in my first Olympic race which I took part four years after I started running.

Lake Biwa Marathon is one of my favorite racing events. In its 2009 edition, I stood 3rd following Kenya’s Paul Tergat and Spain’s Jose Rios in 2:10.49.

Maybe I am being a little hard-headed I would like you to know that I am still not afraid of dreaming big dreams. Deep within my heart, I know that one day, if it is God’s will, I could come close or break World Marathon record. I feel like it is injury that is holding me up. To come out of it and write a success story is what makes a true hero out of an athlete. I am counting on such a comeback!

Pragmatic and Just Viewpoint That Calls for Justice