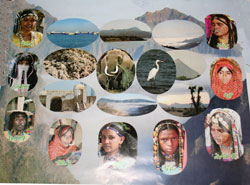 International Tourism Day, 27th September, was marked under the theme “Tourism- Celebrating Diversity” at the Expo hall on Saturday, 26th of September for its 30th time worldwide and for its 15th in Eritrea.

During the occasion Mr. Yohaness Tekie, representing Eritrean Tourism Services Association said that the beauty of diversity is reflected and emphasized through tourism which mainly depends on the encouragement of diversity of cultures, languages and traditions. He also added that Eritrea is becoming a tourist’ destination owing to the prevailing peace and stability. In this connection, he called on the different service giving institutions to advance the tourism sector by provide satisfactory services to the customers.

The theme chosen for this year’s world tourism day is indeed a timely theme viewing it from the point that peace and stability are a prerequisite for the promotion of tourism. As is generally known many countries today are constantly embroiled in conflicts of racial intolerance, political disorders and division along religious lines, which is adversely affecting their progress.

As such, cultural and ethnic diversity is usually viewed as a problem. However, under ideal circumstances diversity can never be a problem; it is rather a blessing that enables the fostering mutual respect and co-existence.

Contrary to the prevailing situations in other countries, cultural diversity is celebrated in Eritrea. Home to nine different ethnic groups, the harmony and mutual respect for one another exhibited by all members of the different ethnic groups is indeed exemplary. It is this shared experience of harmonious co-existence that constantly enriches and strengthens the Eritrean people’s common values and unity. The unity in diversity is in fact the basic social fiber of the Eritrean people’s culture.

However, cultural diversity in most parts of the world serves as a cause for division. Nevertheless diversity can be a tourist attraction only if it is celebrated and strengthened. This subsequently will secure harmony and stability in any given society.

The importance of diversity in promoting tourism is ranked among the first. It is a given fact that tourists choose a certain destination for its uniqueness, special endowments, peace and serenity. What makes a given destination even more alluring is the customs and traditions of the people inhabiting it. Different people of the world have their own distinct cultures and way of living that set them apart from others. So what could be an ordinary part of daily life for someone, might be a mysterious and awesome sight for someone else. And it is this instinct in people to discover what is different and strange that keeps tourism alive.

It is in connection with this that the need for creating a sense of newness and stimulating eagerness for fresher acquaintances arises. Hence, cultural diversity is a crucial aspect of tourism, which Eritrean is splendidly endowed with. The adornment and clothing of the different ethnic groups, their hairstyles, their houses embellished with creative handicrafts, the customs’ and traditions are so remarkably beautiful that they leave a lasting memory imprinted in one’s mind.

Moreover, Eritrea is gifted with fascinating landscapes and locations that can serve as tourist destinations, including marine resources, historical and archeological sites and many buildings of colonial legacies that include of Turkish and Italian colonizers that are available mostly in Massawa, Asmara, Keren and other cities of the country. Furthermore, efficient transportation, first-class hotels and tourist and travel agencies also contribute significantly to the flourishing of tourism sector in Eritrea.

Also speaking on the occasion, Mrs. Akberet Teshale, in her presentation of statement of the Tourism Ministry’s branch office in the Central Region, she highlighted the government’s investment and efforts in putting in place the necessary infrastructure and other facilities that would add impetuous to the advancement of tourism sector. As can be recalled the Ministry of Tourism has a training center that puts into effect the desired end of delivering satisfactory services. Since its establishment in 1998, Hotel and Tourism Training Center (HTTC), has graduated a total of 2,710 trainees, of whom 2,300 were women, in various courses that include: front office operations, house keeping, food and beverage services, food and beverage control, food preparations, hospitability accounting, multi-skill hotel and travel operation and facility inspection.