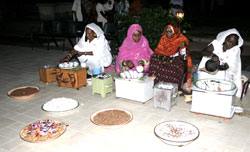 Exhausted bodies need long hot bath or may be long hours of nap to revive energy, as drained minds need some space with any kind of relaxant, one of which is coffee. The scent of ground coffee and refreshing aroma of steaming espresso machines is a welcoming nature of the downtown streets of Asmara and other towns in Eritrea. Almost every café in most cities of the country, especially the capital Asmara, happens to own magnificent models of espresso machines and magnificent people that operate them..

Coffee is a traditional brew in most ethnic groups of Eritrea, each of which possesses variety of ways in preparing the coffee ceremony. Taking the Tigrinya culture for instance, coffee is prepared as a gesture of warm hospitality especially for guests that come a long way. However, drinking coffee in Eritrea is not just about pouring a concentrated coffee beverage into a cup or whatever sort of chinaware is used for that purpose.

Preparing coffee, or maybe we should call it a coffee ceremony in this case, would take more than an hour starting from the very beginning of roasting the coffee beans to serving the final brew of the coffee. For this reason, preparing coffee for someone in Eritrea would mean that you are going to have a long and nice chat with that person.

A wife often waits hours for her husband to arrive form work or any place he might have gone to, so that they could drink coffee together. In fact, it is most commonly at that moment that Eritrean couple gets to have quality time together, talk about things and catch-up with each other. Indeed, that would be the perfect moment for the couple to create a cozy atmosphere to talk their hearts out.

Traditionally, coffee in most parts of Eritrea is prepared by putting ground coffee in a coffee pot, usually made of clay. But first the coffee beans should be roasted and grinded. Then you mix the ground coffee with water, which of course the proportion differs determining the strength of the coffee. Later, heat is applied to the brew until the beverage tends to burst out of the top of the clay pot.

In most occasions, coffee in Eritrea is served three times for each guest. The first cup is obviously the best as the coffee-water proportion in the brew is normally coffee dominant and is by far very strong. Hence the following two or three rounds get thinner and weaker as the water takes over the proportion.

Normally, coffee ceremony in Eritrea is an integral part of the social and cultural life. An invitation to attend a coffee ceremony is considered a mark of friendship or respect and is an excellent example of Eritrean hospitality. Performing the ceremony is almost obligatory in the presence of a visitor, whatever the time of day. You can’t be in a hurry though-this special ceremony can take a few hours. So you have to sit back and enjoy, because it is most definitely not instant.

For an ordinary or maybe a typical family of the Tigrinya ethnicity, it is the women’s duty to prepare the coffee and the men normally appreciate and comment on the quality of the brew.

The coffee in the cafes, like in most international ways is brewed by forcing very hot (but not boiling) water under high pressure through coffee. And the coffee is best served hot. That is normally called, as adopted from the Italian language, espresso.

Eritrea’s homage to coffee is sometimes elaborate, and always beautifully ceremonial. The tradition in preparing coffee has not changed its taste for centuries and occupies a center stage in the country’s value of culture, which portrays the true hospitable nature of Eritreans.