Of Chauvinism and Chauvinists in Eritrea 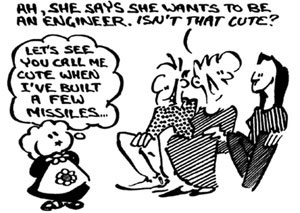 Someone once asked me what male chauvinism meant and I told him that the dictionary defines chauvinism as “the belief held by some men that men are superior to women.” He looked surprised and said, “But that is not only a belief limited to some men, it is the universal truth. Most men and even many women think like that.” Although one would normally think that such attitude should belong only to cavemen, a lot of people in the 21st century, both educated and uneducated, still believe that men are more intelligent, more decisive, better equipped to lead and thus better beings altogether. For centuries women have been deprived of their basic rights due to inherent traditional beliefs that they are lesser creatures and that their only purpose in life is to bear children and serve their husbands or men in general. And since almost all cultures in the world have similar attitudes towards the fair sex, women’s plight has been and still is universal. Every society and culture in the world has definite perception about what it means to be a man or a woman. The identity of men is usually associated with positive things such as strength, leadership and many other good qualities. But when it comes to women often the opposite is applied, such as weakness, inanity and impurity. Such negative and biased stereotyping has for a long time held women back from exploring or fulfilling their potential and hence our world missed out on so many good things that women, given the chance, could have contributed over the ages.

Women living in traditional societies such as in Africa and Asia have had to bear added burden as a result of the overly oppressive cultures and hence face a bigger challenge in their struggle to secure equal rights. Not only do traditional norms conceive women as inferior but also put a negative label on everything associated with being female. Traditionally the image of a woman encompasses everything that is evil and impure to the extent that having a baby girl was considered a curse in some cultures, and this kind of mind set still persists today. Such negative perceptions of women are handed down from generation to generation through seemingly harmless words or actions. On a more positive note the image of a woman is also associated with gentleness, kindness, motherhood and all other character indicative of a loving nature. In a rare demonstration of fairness, traditional cultures also sometimes portray men aggressive, unreasonable, selfish and naïve.

Although not as drastic as some cultures in the world, traditional and cultural attitudes towards women in Eritrea also tend to be biased. However, Eritrean women have had the chance to prove their equality and have done brilliantly so in the armed struggle for independence. Defying all the cultural norms in which they had been brought up, Eritrean women fought along side their male compatriots and proved women can do anything if they set their mind to it. Yet, although this fact has revolutionized the way Eritrean society views women, it would take more than one shining example to change age-old attitudes, because despite the fact that Eritrean women have proven themselves equal, people still cling to old beliefs and continue to stereotype women.

Ask a number of Eritrean men today, educated, uneducated, young and old, and they will all tell you that women can never be equal to men. A young man going to the same university with a girl, attending the same classes and sometimes even getting lesser grades than her would stubbornly maintain that he is better than her in everything that matters As mentioned above women’s participation in the armed struggle has indeed changed women’s image in Eritrea, however old beliefs and stereotypes still linger and would often come up to the surface at some points. For instance, there is a saying in Tigrigna that is roughly translated to ‘a donkey and a woman need to be beaten once in a while’ and you could hear a modern Eritrean man quoting this adage whenever exasperated with a woman. One would think that women being humans they would at least be given a better status than a donkey. Although things have improved for women since the days during which this saying was coined, Eritrean men still have a long way to go before becoming true believers in gender equality.

Usually, there are thee types of men in our country when it comes to gender equality, those who believe

in equal rights for women but don’t practice it at home, those who are undecided whether women could be their equal and those who adamantly maintain that women can never be equal to men.

The first category of men are the ones who advocate for gender equality and educational and career opportunities for women. But when it comes to their home, these men would never accept a woman who is either more educated than them or who earns more money than them and they would never ever think of helping their spouses with house chores. Even if these men marry a woman who has a higher education or who earns better income than them by accident, they will perpetually be as prickly as a wounded bear and would go through life thinking that everyone is laughing at them behind their backs.

The second category are those who would believe and then deny the equality of women as the occasion requires. These men would say they believe in equal rights for women in meeting and seminars and in so doing would think they are doing women a huge favor.

They would not object to a woman being an educated professional if at the same time she manages to be a good wife, a good mother, good-looking, good-tempered, well-dressed, well-groomed, and unaggressive. They would teach their daughters about gender equality and tell them that they should stand up for themselves but it would never cross their minds to accord their wives the same courtesy.

The third type of men are those who would never accept the concept of gender equality even if the whole world would tell them so. To these men it is inconceivable that women could ever be equally intelligent or capable; so what if Eritrean women fought in during the liberation struggle and endured the same hardship as their male compatriots, women can never equal to men.

But women also, either due to lack of education or societal influence, are male chauvinists themselves. There are many women who would view the notion of gender equality or the fact that women should have the same rights as men as dubious. There are some who would think it the highest form of female sophistication and finesse to suffer the abuses of their spouse silently. There are also those who would be utterly disappointed and feel like a failure if they give birth to baby girls. This only proves that the battle of feminism is not against men and their views of women but against social norms in general that have for ages tended to victimize women and thus even more difficult.

Feminism or the concept of equal rights for women is not a way of saying that women are better beings nor it is a conspiracy against men to rob them of their advantage but it is an acknowledgment of present gross disadvantage against women and the struggle to tip the scales so that men and women could be equal. It is as someone said ‘woman was taken out of man; not out of his head to top him, nor out of his feet to be trampled underfoot; but out of his side to be equal to him’.

Commitment To The People: Political Culture Of The Eritrean Leadership