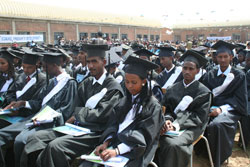 The establishment of various higher educational institutions all over the country that began in 2004, that includes the Eritrean Institute of Technology in Mai Nefhi, the college of Marine Science and Technology, College of Arts and Social Science, Hamelmalo College of Agriculture, Orotta School of Medicine and others has stimulated a notable rise in the number of students graduating in various fields of study.

Prior to the establishment of these institutions, access to tertiary education was confined to University of Asmara only, which accepted a limited number of students every year. Thus, the move to open multiple colleges came at the right time, which immediately bore fruit in registering a decisive leap in the over-all education system.
Being the only institution providing tertiary education, the University of Asmara could not cater to all students who needed or sought training in higher education. Consequently the number of students graduating from the university was not compatible with the number of skilled professionals required for the nation building process. But, now, due to the availability of the newly opened independent colleges there is an increase in the number of students trained in different skills. Moreover, even students who do not score passing marks have now the opportunity to get vocational training in technical or vocational colleges.
The Halhale College of Business and Economics is among the higher educational institutions that were established in 2004. The college was previously temporarily located within the campus of the Eritrean Institute of Technology, but now functions an as independent college at Halhale.
The college offers training in various fields of business studies including accounting, business administration, management, marketing, tourism, hotel management, as well as secretarial science. In its second commencement that was held at Halhale on Saturday, October 3, 2009, the college graduated a total of 816 students in the aforementioned specializations, out of which 516 completed their studies at degree level, 315 at diploma and 36 at certificate level.
The growing number of students who are eligible to join higher educational institutions is an encouraging outcome of the ongoing efforts to develop the education sector.   However, the achievement scored is not only in the rise of the number of students but also in the atmosphere of competence cultivated among the students with the help of programs such as the Zagre Award.
Speaking at the graduation ceremony, Dr. Yemane Misgna, Dean of the Halhale College of Business and Economics, said that the college has now charted out plans to strengthen its undergraduate programs as well as make the necessary preparations so as to commence its graduate programs in the near future.

An all-round development cannot be secured without investing on education. The more skilled human resources are produced, the more they will contribute their share in the national developmental campaigns. In this regard, Dr. Yemane, said that the government has been able to see the returns of its effective investment on the education sector.
All of the afore-mentioned colleges are indeed striving to boost students’ competence as well as the quality of the training offered through continued revision of curriculum.  According to Dr. Yemane, the dropout rate among the students of the Halhale College is currently below 5%, indicating major improvements in their academic performance. He further pointed out that 5% attrition rate is a standard figure among the institutions of higher learning everywhere in the world.
The college of business and economics currently has 1,900 students attending. Further infrastructural activities are also under way to improve teaching facilities and ICT laboratories.

Present at the occasion, Ms. Askalu Menkorios, the Minister of Tourism and Designee of His Excellence, President Isaias Afwerki, said that despite many limitations, the Eritrean government continues to invest on different programs of higher education throughout the country so as to secure a broad-based participation of students in varied areas of specialization.
With the objective to cultivate productive and resourceful nationals across different areas of profession the ongoing endeavors to improve the overall educational system are at full swing and are already showing noticeable outcomes.