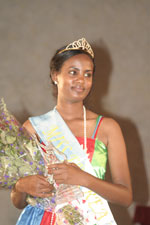 Beauty as they say is in the eye of the beholder. What a difference it would have made if the

naturally born beautiful women of Eritrea could showcase their beauty in the supermodel contests.
As a matter of fact, a number of beautiful young women have represented Eritrea in different beauty pageant contests and captivated international audiences.

In the past, considering the demographic background and cultural barriers, Eritrean beauty queens were unable showcase their Eritrean features and couldn’t break the traditional barriers to show the rest of the world what Eritrea has to offer.
Beauty models have been appreciated for their beauty, stature and good skin tone all over the world. Not only beauty models, women in general posses feminine virtues, which include gentleness, tenderness, refinement, patience, intuitiveness, calmness and so on, which are mostly absent in men and for the acquisition of which men fall in love with women.
Just as with its natural scenery and resources, Eritrea is endowed with diverse cultures, each of which possess unique beauty and captivating African features. Having this in mind, the idea of representing Eritrea in a regional, continental or may be international beauty pageant contests at different points in time after independence, came up as an inevitable breakthrough to overcome the cultural barriers. Indeed, with the introduction of this very idea, various Eritrean women gained the opportunity to demonstrate their intrinsic beauty.

Very recently, Eritrea was represented by Rahwa Ghebrehiwet, a beautiful young Eritrean of sharp wits and academic success, in the Miss East Africa beauty contest held in Burundi in 2008 and came out as a second runner up, while standing first in the people’s choice category.
The contest, which was held on December 19 last year, involved 28 contestants from Tanzania, the Host Burundi, Kenya, Uganda, Rwanda, Somalia, Eritrea, Ethiopia, Djibouti, Madagascar, Seychelles, Mauritius and Comoros.
Coming out triumphant in the Miss East Africa 2009 competition, Rahwa said, “I was happy to win the people’s vote. East Africans have very distinctive features and what a competition like this offers is an opportunity to show the rest of the world just how diverse we are.”
Something is better than nothing is what the English proverb says, but Rahwa’s inspiration and willingness goes beyond this. She has put herself in the project of organizing a beauty contest at a national level and share her experience of success with rising Eritrean beauty queens.
Hence, on July 25, 2009, Rahwa Ghebrehiwet with the support of the ELEM magazine, and Fashion Designer Lu’ul Tekle organized the first ever Miss Eritrea 2009. Of course, two had to be elected to represent Eritrea in the yet again Burundi Miss East Africa 2009 from among the 18 glamorous Eritrean beauties that qualified to the finals.
130 beautiful women representing almost all the nine ethnic groups of Eritrea participated in the Miss Eritrea 2009 beauty pageant, out of which 18 were selected for the final pageant after five

stages of display. The final contest was a glamorous event accompanied by traditional songs in the presence of people that came from all corners to witness the first ever Miss Eritrea contest. Coincidentally, most of the contestants have the same age with their country Eritrea, which gained its independence in 1991.
Having put the core criteria of a Miss Eritrea 2009, the judges nominated Selamawit Zerabruk and Sephora Mesele first and second runner ups consecutively and both will participate in the Miss East Africa 2009, which is due to be held in Burundi.

Commitment To The People: Political Culture Of The Eritrean Leadership