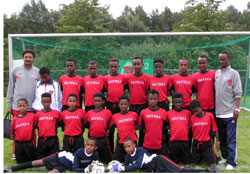 Eritrea’s future in the soccer world rests upon its young talented players who play here and there in the streets, school pitches and mini-soccer fields. Very young students, with an average age of 13, who polished their eye-capturing skills and techniques in such pitches, were picked up from a tournament held in Asmara and represented Eritrea, under a team name Warsay, in the 37th Norway Cup in mid June 2009. They came back holding a big trophy that attests to their excellence.

The Warsay team drew Kenya’s Matare United to finally win the Norway Cup 2009 trophy. Matare United was six time Norway Cup champion between the years 2001-2008. But in the 2009 Norway Cup, where 1,400 teams with a total of 30,000 players from 65 countries took part, Eritrea’s Warsay team who lost not a single match won the tournament.

Let’s see where these optimistic players will reach from this time on and how many of them will be able to represent Eritrea’s big clubs and national teams. It is not about crossing your fingers and wishing for the best. But, it is all about working hard with the golden football-crazy kids in different cities and making them heroes. It is them who can replace Eritrea’s past and current enviable footballers.