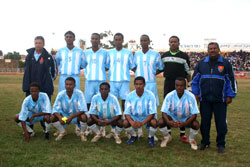 Talking about international soccer competitions, whether at international club level, youth national team or the senior national team itself, Eritrea has never gone beyond first pre-qualifying stages except on very rare occasions. At least that was how it was until about the end of 2006 when the wind of change breezed over Eritrean football.
In 2007, to disprove the aforementioned fact, the Eritrean youth national soccer team jumped up to the biggest tournament for the first time in the nation’s post-independence soccer history. It was such a great privilege for Eritrea to represent East Africa in the U-17 African Nations Cup competition held in Togo from 10-22 March, 2007. In doing so, Eritrea, together with other seven African countries, headed to Togo for a group final qualifier competition against the continent’s biggest national teams namely: Nigeria, Ghana, Tunisia, South Africa, Togo, Burkina Faso and Gabon. However, as if fate was against them, Eritrea had to face Nigeria, Ghana and Burkina Faso in the so-called group of death to progress in the tournament.

Let us start by looking at the route Eritrea had gone through to reach its maiden Nations Cup competition and to finally line up against those great national teams at Togo-2007.

The promising U-17 Eritrean national team lads first beat Libya 3-2 on aggregate in a two legged pre-qualifier match to face Egypt – the 1997 African U-17 champions. They dared to draw 1-1 against Egypt in the first leg to grab the attention of the soccer crazy fans at home in the second leg that took place in Asmara.

For the Egypt game, Asmara stadium was tightly packed, the fans were extremely supportive and the players were determined to grab a point or two from the match that would sweep away the great contenders off the competition. To the surprise of everyone, Eritrea didn’t only win 1-0, but stole the game with overlapping brilliance. Looking at many great chances missed at about the end of the game, Eritrea lost its chance of widening the winning result against Egypt, which was so unusual. For the players and the fans, though, all that mattered was the progress of the team to another qualifying game against Zambia.

Zambia, on its turn, was forced to lose 1-0 in Asmara Stadium and 2-0 in Lusaka in the hands of the Red Sea Camels, as the Eritrean national team has been nicknamed. This way, the Eritrean youth team bought a ticket to Togo, put a significant milestone in the country’s history and lifted the moral of Eritreans in the soccer world. The lads received a heroic welcome on their return home and inflated the expectation all over the country.

To meet these expectations, the team started working hard for their upcoming games from the start. The Eritrean U-17 boys, all picked up from a limited Asmara pool, had to struggle bitterly in the group of death at Togo against great nations made up of players with great experience. In addition to the unbalanced experience factor, our novice players were dominated physically and technically in their group – ‘group of death’.

Indeed, it is a disappointing performance from Eritrea at Togo. The team seemed to have lost all the energy it had shown on the way to the tournament. But when you look at the teams it played against, certain facts become apparent.

If the Eritrean U-17 team keeps improving further, much could be expected form them for they have surely signaled a prelude for further and wider historic achievements.