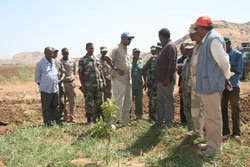 On Saturday 17 October 2009, President Isaias Afeworki began his tour of inspection in the Gash Barka region following the graduation ceremony of the Sawa Vocational Institution. At a time when most of the country has been connected through an extensive network of roads, the President began his tour by taking the road through Girmaika -Adibara, the towns of Senketknab, Fedadeb, Germayka and Temerat- to finally reach Tessenei, a town which is gradually evolving into a commercial and agricultural hub.
The objective of the tour was to observe the development projects that have been undertaken around Aligeder and Gerset and to discuss further plans with the relevant executives involved in the projects.  One of the many unique aspects of Eritrea is that even the highest official supervises projects on the ground rather than depend on reports presented on papers. President Isaias observed the dam under construction in Aligeder which is expected to enable the people of the region to be independent from rainfall and work towards achieving food security. On inspecting the dam which has a circumference of 5.5kms and capacity to hold up to 6 to 8 million cubic meter water, the President was accompanied by students who had just finished their training at the Sawa vocational training. As evidence to the development activities being accomplished in the country and upgrading human resources, the contractors and constructors engaged in constructing the dam are all graduates from the University and colleges in the country.
After receiving briefing about the work being done in constructing this dam President Isaias noted the need for speedy completion of the dam.
Following the exchange of views on deploying the necessary machineries and other facilities aimed at speeding up the construction of the micro-dam, President Isaias visited Aligeder, during which he observed the implementation of development programs in the area.
Later on, President Isaias inspected the work being done in putting in place of modern irrigation infrastructure facilities around the Gerset dam with a view to putting the nearby plains under cultivation.
As modern irrigation farming requires vast plains for effective output, the undertaking of drip irrigation equally needs the construction well-leveled dirt road. To this end, the installation of water pipelines is being stepped up, besides the construction of 90 kms road networks.

Moreover, preparations are underway to install 303 and 406 meters long ten pivots in a bid to facilitate the activities of the drip irrigation. The installation of these pivots would make due contribution in expanding the scope of the land under cultivation in double fold, which would in turn back up the endeavors in achieving food security and the development of the agro-industry.

Also in the course of the visit to inspect a number of palm and mango trees planted for experiment purposes, the President received briefings by experts on the encouraging condition of the trees and the suitability of the area for such trees. He subsequently observed the experimental 20 hectares of sugarcane plantation, during which he stressed the need for making the necessary care for the experimental plantation for better outcome.

President Isaias further observed the construction of a water reservior with a capacity of holding about 20,000 cubic meters at a 100meter of elevation with a view to irrigating extensive farmland through pumping waters from the Gerset Dam. He conducted discussion with heads of the institutions engaged in the undertaking on ways of facilitating the construction process.

It is undeniable fact that the strategic dams in the country are not only the driving force for the national development endeavors but also have a paramount role to play in promoting sound ecology, ensuring biodiversity and enhancing salubrious weather.

As part of efforts to improve the people’s standard of living, the construction of 500 housing residential complexes is in progress around Gerset. The foam-made residential houses are being undertaken through the Homib Construction Company at low expenses and manpower. The implementation of this project fully attests to the Eritrean government’s endeavors towards ensuring social justice and expanding equitable social services in different parts of the country.
Upon inspecting the construction project that is going to house 12 families at a quite unexpected location, President Isaias pointed out that such a project can relieve housing problems at a reasonable coast and called for a better organization when undertaking such important endeavors.

President Isaias’s final stop during his tour was at the lime and bricks processing factory in Barentu, where he pointed out that the Gash Barka Region is abundantly endowed with raw materials for such production and that they can be processed at low cost. He then called on relevant bodies to install similar processing plants in different parts of the region. The President further highlighted the need for alternative sources of energy so that such industrial endeavors do not have an adverse effect on the environment.
During this two-day tour President Isaias was accompanied by the Administrator of the Gash Barka region, Mr. Khasay Gebrehiwot and the Commander of the Western operation zone Major Gen. Haile Samuel.

Why Exercise Won’t Make You Thin

September and The Eritrean Revolution