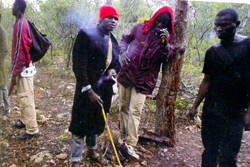 In the Past Few Years, Illegal emigration from Sub-Saharan Africa to the Canary Islands has soared. The constant and sometimes mass departure of pateras (small boats) and Cayucos (larger boats) is an iceberg, only the tip of which arrives at the Canary Islands and makes the news headlines. The migratory flow and the organized criminals groups that profit from it add criminal conduct to the humanitarian risk they are already fomenting.

The business of seafaring migration includes the more than € 100,000 each Cayucos generates and the € 75m a year moved by illegal- trafficking rings, as well as the added costs for the state in terms of diplomatic and police measures aimed at preventing or mitigating this kind of illegal immigration.

Spain is the port of entry into the “European dream” most North and Sub-Saharan African emigrants share. The insufficiency of the regular routes has generated alternative routes, which channel migrants towards the coasts that separate them from their dreams. Most of those who opt for these illegal routes make long and difficulty journeys over land departure points on the coast of Guinea, Mauritania, Senegal, The Gambia or the Western Sahara, to board pateras and Cayucos to the Canary Islands, the southern frontier of Europe.

The large number of potential emigrants from sub-Saharan Africa generated a black market. At a humanitarian level, it is significant because of the human drama for thousands of emigrants from more than 60 countries worldwide, most notably Senegal, The Gambia and Morocco, and also including Mali, Guinea-Bissau and the Republic of Guinea. Migrants risk their lives trying to navigate the Atlantic Ocean to the Canary Islands in traditional fishing boats in inhumane conditions.

The price of prosperity is high as the migrants must also assume, apart from the family and social costs, financial costs. “Tickets of passage” make groups of organized criminals rich, either in full connivance with local authorities or at least taking advantage as they turn a blind eye. According to a 2007 Spanish Supreme Court ruling, groups that organize the crossing can now be considered organized criminals gangs.

However, it is also a source of concern that this criminality may be associated with other forms of cross-border crime. The possible association between various forms of crime makes illegal immigration by sea no longer solely a security and sea-rescue issue but also a matter of internal security. Routes opened for clandestine migration arte also used to introduce drug trafficking smuggling or pirated goods.
The emergence of this phenomenon has fostered diplomatic and economic cooperation between the EU and Africa to improve the control of migratory flows. It also requires new cooperation in policing. Spain is responsible for controlling clandestine migration that breaches the security of the EU’s outer borders. Because of this, the Spanish government created the Canary Islands Regional Coordination Center to facilitate coordination between the various administration, departments, institution and bodies, military and civilian, national and international, to control clandestine migration by sea to the Canary Islands.

Illegal immigration by sea to the canaries, as an act of international organized crime, requires the basic components to travel more than 1,000 nautical miles. The necessary activities for organizing a sea crossing include luring the migrants, hiding them and housing them somewhere near the departure point until the time comes and later taking them to the places designated by the organization.

But this process does not require a sophisticated organization such as those in other criminal spheres, like drug trafficking and terrorism. Immigration groups tend rather to be unstructured combinations of local mafia network and opportunist traders. Putting the owners of Cayucos in contact with the organizers of the crossing has been perfected to adapt to maritime police and coast guard pressure off African shores.

Unlike the organization of journeys in pateras or Cayucos, clandestine mass illegal immigration in merchant vessels requires greater preparation. The appearance of this kind of “slave ship” needs a more sophisticated criminal network.

Combating Clandestine Immigration
Combating this kind of clandestine immigration is generating major costs for Europe and a large effort in economic, material and human terms for the Spanish government. This includes the cost of surveillance and control operations in Africa, plus the cost of repatriations, deploying the Armed Forces, the Red Cross, Maritime search and Rescue Service, detention centers, etc. Pressure in the countries of origin is pivotal, including support of coastal countries with which Spain has signed memoranda of understanding for police cooperation. Surveillance and control by European agencies in the territorial waters of other countries have also yielded results.
Nevertheless, significant profits from human trafficking encourage these mafia networks to seek new procedures and means of transport. In addition to the possible incorporation of merchant vessels, there has been a change in the traditional routes of the Cayucos, such as using the Cape Verde Archipelago as an intermediate point. Cayuco-taxis also ferry illegal immigrants to larger boats in an attempt to escape surveillance.

Trafficking immigrants from Africa to the Canary Islands using traditional boats and so-called slave ships has become a very lucrative business for the criminal networks. This kind of mafia is not yet highly structured but has perfected its procedures since 2005, changing the routes and boosting its information capacity so as to adapt to the air-sea agencies’ systems and deployment of sea border surveillance and control in the Canaries and in Africa.

Criminal networks would have developed further, if not for:
–    Spain’s multidisciplinary effort and unprecedented diplomatic drive for long-standing bilateral police and governmental cooperation.
–    Sea-border control operations in territorial waters of non-EU countries via intermittent deployment of EU air-sea units and the permanent deployment of Spanish Interior Ministry personnel.
–    Establishment of liaison officials and attaches from the interior ministries of Morocco, Mauritania, Senegal, Cape Verde and Guinea-Bissau.
–    Police cooperation from the African countries involved.
–    Spanish repatriation policy.
–    Centralization of all actions via the Canary Islands Regional Coordination Centre.
Despite these achievements, this is nevertheless a type of migration with structural causes. Despite the risks involved in trying to immigrate via this route to the Canary Islands, the need and expectations of a better standard of living will continue to feed the numbers of potential immigrants. A number of more-or-less organized criminal groups tap into this demand, obtaining millions of Euros in return. Police pressure at the source and the system of repatriating those who manage to arrive illegally are the most efficient measures in controlling the phenomenon. These measures and the necessary information campaigns to dissuade Africans from undertaking such dangerous illegal adventures are fundamental to preventing unscrupulous criminals from profiting at the expense of the suffering of others.

Sixty-Seven Schools within A Hundred Days