Eritrea at a Glance III 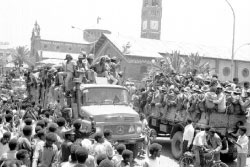 De Facto Independence: With the end of the 30-year liberation war on 24 May 1991, Eritrea archived its independence in effect, if not yet by law. At once, the newly formed Provisional Government of Eritrea (PGE) set about reconstructing the country’s devastated infrastructure, while building a rudimentary state apparatus to manage the transition to internationally recognized sovereignty.

The war had left Eritrea in ruins. Water and sewage systems in the towns barely functioned. The few asphalt roads had been torn up by heavy military vehicles. Port facilities in Massawa were badly damaged by heavy bombing after the city was liberated in February 1990. And the rail system was entirely dismantled, its iron rails used to make bunkers.
What remained of Eritrea’s light industry had not been maintained or modernized in a quarter century, and urban unemployment exceeded 30% of the economically active population. Meanwhile, persistent drought had kept the rural population on the brink of famine. At the end of the fighting, 85% of Eritrea’s 3 million people depended on donated food aid. The World Bank estimated Eritrea’s per capita income at only $70-150, compared to $330 for the rest of sub Saharan Africa.

Referendum & Recognition: On 21-23 April 1993, following a year of extensive popular education, organization and logistical preparations in which nearly 1,125,000 potential voters were registered, an Independent Referendum Commission staffed by prominent Eritreans  from wide-ranging background conducted a national referendum on Eritrea’s political status. More than 98.5 % of those eligible participated at polling stations throughout Eritrea, in Ethiopia and Sudan, and as far away as the Middle East, Europe, North America, and Australia.
The balloting was monitored by the United Nations, the Organization of the African Unity, the Arab League, the Non-Aligned Movement and representatives of more than a dozen countries, including Ethiopia. When the results were tallied, 99.8 percent of the voters chose sovereignty. Sudan, Ethiopia, Italy, the U.S. and other countries with local diplomatic representation immediately recognized the State of Eritrea. On 24 May, the PGE officially declared Eritrea’s independence. Soon afterward, Eritrea joined the Organization of African Unity and the United Nations.

State-building: Once achieving international recognition, the Government of Eritrea was recognized to manage the transition to constitutional government. Distinct responsibilities were assigned to the executive, legislative, and judicial branches of the new government, and a fifty-member constitution commission was created to oversee the constitution making process.

Eritrea’s ten colonial era provinces were reconstructed into six co-equal regions, which held elections for regional legislatures. The new regional governments took on many of the responsibilities for administration and reconstruction and development in their areas, developmental ministries (all but the Ministries of Foreign Affairs, Defense, Justice, Finance and Information) developed their operational functions to the regional level.

The civil service was also streamlined and reformed. Its management structure was decentralized, and personnel were re-deployed to offices in the administrative regions .During this time, the public sector workforce was reduced by 30%.
In the midst of this reorganization, the new state had to design everything, passports, drivers’ licenses and postage stamps to telecommunication system, school curricula, road and rail networks, and tax trade and investment policies. in effect, it had the task of creating a new country from scratch.

EPLF/PFDJ: In February 1994, the EPLF convened its third congress and voted to dissolve the Liberation Front, as it had achieved its basic mandate – the liberation of Eritrea. At this time, the delegates launched a new post-war political movement, the People’s Front for Democracy and Justice to build on the EPLF’s legacy and to lead the country through the post-war transition to constitutional government.
The PFDJ’s basic goals, as summarized in the National Charter adopted there, were: national harmony, political democracy, economic and social development, social justice (economic and social democracy), cultural revival and regional and international cooperation.
At the core of its mandate was a commitment to engage the population in national reconstruction and to facilitate its full and active participation in the unfolding political process. In some communities, up to 80 percent of the adult population signed up in the year after the front was launched. By 1996 there were 6000 branches at the local level, with approximately 100 members in each.
The new organization began by holding monthly group seminars and later shifted to an organizing mode focused on generating community–based development projects. Local organizers went through basic training courses where representatives of government ministries explained the support they could get for local development initiatives and asked them to serve as channels for communicating people’s concerns back to the state .

Continuing the economic activities developed during the liberation struggle, the PFDJ became an important catalyst for the growth in the post-war economy. PFDJ enterprises inherited from the war for independence included construction, well-drilling, land transport, shipping, metal works, export-import concerns, foreign exchange operations and a housing bank. PFDJ companies took on many local projects which other private contractors declined, such as the construction of hospitals and schools in remote areas.

Self-reliance : Eritrea is committed to self-development with dignity, relying first and fore-most on its own people to set the pace, direction and character  of  the country’s passage from colonial subjugation to full economic sovereignty, as well as political independence.
In 1995 the government ended food relief in favour of the public works program that enabled impoverished Eritreans to meet their basic needs while rebuilding the country. A National Service program was enacted to bring young people into the nation-building process. International aid agencies were asked to integrate their activities into national development plans, under Eritrean leadership. And major investments were made in fields of education and public health.
The results were stunning. In the first ten years after independence, the infant mortality rate was cut in half, child malnutrition rates dropped by nearly two thirds, and life expectancy at birth rose from forty six to fifty five years. At the same time, the number of schools in Eritrea more than doubled while attendance, particularly among girls, rose dramatically.

High levels of popular participation in the country’s reconstruction and development are the hallmark of Eritrea’s post-independence growth. At the same time, instances of crime or corruption have remained lower than anywhere else in Africa- and perhaps the world. This speaks of the high levels of social cohesion and civic pride that propelled the development process.

Constitution-building: The fifty numbers of Eritrea’s constitution commission, set up after independence, were drawn from a wide spectrum of the society. They included representatives of nearly all 9 nationalities, as well as veteran leaders of the ELF. Nearly half were women.
In mid-1994, commissioners traveled across the country and abroad to convene discussions among Eritreans on key debating points. Among them were:  the role of the state in promoting equity and social justice; how the new government could lead the nation in sustainable development; how governmental powers should be separated and what would be their relationship; whether to have a presidential or a parliamentary government, or a form that combined both; which officials should be appointed and which elected; what form the legislative body should take; what place the military would have; what role parties would play; what civil and political rights should be enshrined in the document; how  the rights of minorities should be safeguarded; and how the rights of women should be protected. In early 1995 the commission hosted an international symposium on constitution-making with participants from many countries.
The constitution-building process was constructed to strengthen the existing national consensus on Eritrea’s identity and to deepen the unity among its diverse constituents. Entire villages gathered under shade trees to debate fundamental rights and freedoms. Theater and music groups stages performance on these motifs, radio programs were broadcasted in several languages, and highly publicized contests on constitutional themes were held for students to stimulate public interest and heighten participation.
After a draft was produced in 1996, there was another round of public seminars to give people the opportunity to respond to it. On 23 May 1997, a constituent Assembly comprised of 527 members from the provisional National Assembly, all six Regional Assemblies and representatives from the diaspora formally ratified the document, which became the legal frame-work for governing the country once national elections could be organized under its terms and provisions.

Renewed War: Throughout 1996 and 1997, tensions arose between Eritrea and Ethiopia over seemingly minor economic and political issues. However, they were aggravated by a series of armed incursions into Eritrean territory from Ethiopia’s northern Tigray region. The significance of these incidents was made clear by the publication in Tigray in November 1997 of new maps that for the first time claimed significant areas of Eritrea.
When discrete diplomatic efforts failed to diffuse this deepening crisis, and after a series of armed incidents during which several Eritrean officials were murdered near the disputed village of Badme, Ethiopia declared “war’’ on  Eritrea on 13 May 1998 and mobilized its armed forces for a full-scale assault on Eritrea. On 5 June, Ethiopia aircrafts bombed the airport in Asmara. International mediation efforts failed to halt the race toward war, and ground fighting soon broke out at several points along the border.

Three rounds of combat in 1998-2000 produced hundreds of thousands of casualties and displaced nearly 1 million Eritreans. Another 76,000 Eritreans and Ethiopians of Eritrean origin were forcibly expelled from Ethiopia.
Steps toward Peace: With the war stalemated, Ethiopia agreed to a cease-fire in mid-June, and the fighting ended. On 12 December 2000, Eritrea and Ethiopia signed a comprehensive peace agreement in Algiers, assisted by mediators from the U.S., the European Union and the Organization of African unity. Under its terms, a 25-killometer-wide temporary security zone was established within Eritrea that was patrolled by UN peacekeeping forces, while an international boundary commission, whose members were approved in advance by both sides, delimited the contested border. A separate commission investigated civilians’ compensation claims.
Once the commission issued its findings in April 2002 and both parties accepted the outcome, Eritrea turned its attention to the reintegration of the many war-displaced civilians, expellees from Ethiopia and returning refugees from Sudan and to the phased demobilization of combatants within a comprehensive, community-based reconstruction and development program.
Campaign to re-build the Nation: In 2003, Eritrea declared Warsay-Ykealo Campaign, a call to rebuild the nation. Eritrean youth turned from their guns and tanks to shovels and tractors. The once optimistic Eritrean economy that had been devastated by the consequences of the war, was once again awakened. Through this campaign the people of Eritrea are exerting their efforts to achieve the country’s economic stability by working on all economic sectors. The results are tangible and generally speaking, the progress is on the right tracks.

World Cup Trophy on its Way to Eritrea

Marriage and Family Among the Tigre Ethnic Group

Eritrea At A Glance V

Eritrea At A Glance IV