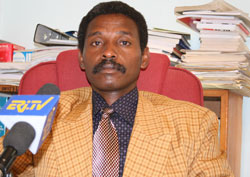 From a linguistic point of view any given language faces extinction either if it does not constantly evolve through literature or is more dominated by other languages. Today in our world, several indigenous languages have lost their traces or even ceased to exist. In view of this fact, the Eritrean government, with the collaboration of the Ministry of Education undertook different initiatives to preserve the country’s various indigenous languages, one of which is using mother tongue as medium of instruction in elementary schools. Nara language is one of the oldest indigenous languages in Eritrea. There are approximately over 41,000 Nara speakers. Mr. Dawd Adem Abushush, is the author of different books in the Nara language. He is the only writer in Nara language in Eritrea.
Shabait conducted an interview with Mr. Dawd Adem Abushush. Excerpts follow:

Let’s start with your background, would you please introduce us with yourself?

I grew up in the revolutionary school during armed struggle for liberation. After independence, I continued my education and then went to the UK to pursue my master’s degree. I am a linguist and a writer by profession. Currently, I am working at the Ministry of Education in Curriculum Department as Head of the Nara Panel. My job there basically entails developing curriculum, particularly in the Nara language.

What in your opinion makes the Nara ethnic and their culture unique?

Nara language belongs to the Nilo-Saharan language family especially under Eastern Sudanese languages. The speakers of this language live in specific areas predominantly in western lowlands of Eritrea.  Traditionally, the Nara people have their own way of settling disputes, conducting funerals, traditional laws.. etc. They live in organized settlements and make a living primarily based on agriculture and animal grazing. However, as with most cultures and ethnic groups, the Nara are also undergoing numerous social and cultural changes as a result of the introduction of modern ideas and views. Most of Nara speakers prefer to use Tigre and Arabic as their second language, as there are hardly any written materials in Nara.

How many books have you written so far and what genre are they based on?

ill now published six books. The first book is a composed of traditional children’s stories titled ‘Hatara Maarbaas’ meaning the first step; I wrote a continuation of this in my last published book ‘Daa Hooga!’. Then I wrote my second book ‘Bana Masalta’ about Nara proverbs and their meanings. My third book, ‘Guliyya’ includes translated stories for the youth, following which I wrote a novel based on the true life experiences of my sister called ‘Ferva Nguulaash’, meaning dig it out. After she was forced to marry against her will my sister decided to join the armed struggle for liberation, which in more ways than one made her life story unique from others. My sister fought bravely and was wounded six times in her head, belly, limbs and back. She is lucky to be alive today after passing through such sufferings. The hardest part for her was going back home and facing my father alone. It was really amusing to see a brave freedom fighter fearing to face her furious father. I believed that her story can be a real source of inspiration for other women. After this, I published a collection of poems in a book titled ‘Buutaa’. I have also published two other books, a dictionary from English to Nara as well as Nara phonology.

What made you want to write all your books in the Nara language?

My aspiration is to create as many written materials in Nara as I can and record historical events and traditional folk stories.  I am striving to make my contribution in preserving and promoting the Nara language. All my books are distributed to the Nara schools free of charge.

Nara language as well all know had no form of written script till recently, tell us the challenges you faced during your research time?

Any writer has to gather information in order to publish a good book. For me finding sources wasn’t an easy job. As we know, it was only in 1993 that Nara language was introduced to the written form, in Latin Scripts, although there were a number of previous efforts to put it in written form. So there are hardly any kind of written documents about this language by native speakers and others. The main reason could be the lack of educated members of the ethnic group, references and shortage of written materials.

I was able to publish my 6th book, only after conducting long years of research ocused on traditional songs, feasts, dances and the like. Besides the aforementioned shortcomings, most of the natives have already forgotten ancient customs. They were amused when they discovered forgotten traditional events transcribed in my book. I gathered some of the information from European universities.

How do you asses the development and preservation of Nara language currently?
As a result of the efforts of the Ministry of Education, there are 17 Nara schools using Nara as a medium of instruction. We also have 101 teachers and about 3,000 students. Thus the number of educated people is increasing and their understanding about preserving language is making progress. And this advancement is vital in the course of preserving the language.

What is your opinion about Eritrean books in general?

I think we have made a good start as a number of books are being made available by different authors. Of course we need to strengthen authors’ capacity and promote reading habits through reading clubs.

Do you have any message you want to convey?

Well, Nara is an ancient language which is closely associated with exceptional dancing, songs, feast and other traditions that need to be studied by scholars. We need to upgrade and revitalize it in today’s world. Language is an identity of the society that should be passed on to the next generation.

Marriage and Family Among the Tigre Ethnic Group

The Martyrs of Ras Terma(Arabic)