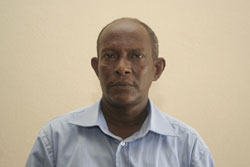 Could you please introduce us with the Assembly (Baito) of the Southern Red Sea region?

The assembly of the Southern Red Sea region has 35 members out of whom 9 are women. It has one chairman and 3 elders’ committee  who are administrators of social service, development as well as law and customs. At least once a month reports from the people’s representatives are presented to the Assembly office. The regional assembly holds extensive discussions and passes recommend solutions based on the peoples wish. It also hears, evaluates the work performed and comments on the performance reports.  This region has 4 sub-zones, which are Araita, Southern Denkel, Central Denkel and Assab.

With the expanding of social service in the region, what improvement has been registered in the living standard of the inhabitants?

Before independence, the distribution of social service rendering institutions was severely limited, especially in the education sector. Majority of the population were deprived of access to education. There were a handful of schools in coastal areas of Assab, Edi and Tio while other areas were deprived of educational opportunity as well as other social services.

Now each administrative district has broader access to education. The number of schools has increased from 5 to 37 schools that include 3 boarding schools. Having boarding school in this region is crucial in securing equal access to education. Unlike the port city of Assab, students in other areas are compelled to travel long hours to attend school. The construction of the boarding school, where water is available, has enabled many children to pursue their education. Thus the number of children attending school is increasing which is the basic factor in building a society equipped with education.
Health service distribution has also witnessed significant increase in most part of the region. Our aim is to train teachers and health personnel from the local inhabitants so as to avoid any shortage of skilled manpower. In this manner we can ensure the provision of health care for all. So far our efforts have borne encouraging outcomes. Furthermore, a number of water projects have been put in place to alleviate shortage of potable water supply.
Most of the social service has only been recently extended and the effort to distribute these services is ongoing. However, the inhabitants of this area are nomads, which makes it very difficult for them to become beneficiaries of the provided service. Thus we are endeavoring to assist the inhabitants by grouping them into organized settlements.

How is female’s participation in education in the region?

I think their participation is showing commendable growth. Now at least, some of them are able to reach up to grade 8. And this is great achievement in our region. Through regular campaigns the number is expected to rise in the future. For now we can only say that we have overcome some of the traditional impediments and slightly change the misguided perceptions regarding girls’ education.

How have the efforts you mentioned above influenced or changed people’s lives?

Well, some agricultural pilot projects were tired post-independence and the outcome was encouraging. Despite the area being a desert, it is endowed with fertile farmland. Some of the places include Ra nias

htey and Ra abai Denkalia area and Gahri are suitable for agricultural activities. Crops like millet and garden activities could be embarked on. As we know the inhabitations are engaged in fishing and trading. We can’t say that we have achieved our goal in agriculture sector due to shortage of water and the inhabitants’ way of life. With the assistance of the Ministry of Agriculture and members of defense forces, however, the inhabitance could slowly learn and adopt farming. There is great potential to boost agriculture production through serious efforts.

What efforts have been undertaken in addressing FGM and other harmful practices in relation to laws and regulations of the assembly?

It is important to preserve traditional values and at the same time discard harmful practices like FGM. Through extensive campaign by different bodies, NUEYS and health teachers’ and administrators, the society’s perception has changed greatly. I remember before 8 years some of the fiercest advocators of FGM were women. But now, as a result of enhanced awareness this practice is decreasing.
Concerning underage marriage I can say that we have improved a great deal. Previously underage marriage was accepted but today as a result of the combined effect of awareness creation campaigns, national service and education, their attitude is changing.

How do you evaluate people’s participation in the assembly’s activities?

Assembly is a representative of the people, elected by the people to serve them by maintaining close contact. The people have elected the assembly members believing that they can serve the community effectively. Thus the community is an active participant of the assembly in informing regarding new events and offering advices. And this is very decisive in reinforcing the assembly’s endeavors.

“Take One Step and the Other Foot will Follow”  Dr. Eden Tareke