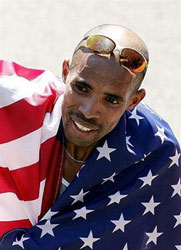 Eritrean-American Mebrahtom Keflezighi, won the 2009 New York City Marathon finishing the race in 2 hours, 9 minutes, 15 seconds. In walking away with this victory, Meb, as he is generally called became the first American to win America’s most celebrated distance race since 1982.  The 34 year-old athlete had also previously won the silver medal in the 2004 Olympics for the US Team. Meb’s historic victory was much celebrated and highlighted all over US media outlets. He appeared on several TV interviews where he said he still has to pinch himself to realize that he has come so far since arriving in the United States from Eritrea in the late 1980s. Scoring a very important victory for U.S. distance running, Meb’s been much appreciated across the country. He even reportedly got an invitation from David Letterman to do the Top 10 list.

Though, Meb’s victory is indeed a proud moment in the world of US athletic, it is not the only reason that he has been in media lime light in the past few days . As many rejoiced over his victory, few chose to dwell on whether the athlete’s backgrounds were ‘American-enough’ to warrant such importance.  In an article titled “Marathon’s Headline Win Is Empty”, CNBC’s Darren Rovell wrote: “Meb Keflezighi, who won yesterday in New York, is technically American by virtue of him becoming a citizen in 1998, but the fact that he’s not American-born takes away from the magnitude of the achievement the headline implies.” Rovell even went further to imply that the money that comes from the winner’s check is the most important factor that drives African or African-born athletes to excel in running.  Making remarks such as: “Nothing against Keflezighi, but he’s like a ringer who you hire to work a couple hours at your office so that you can win the executive softball league,” his entire article dwelled on the biased implication that only an American-born athlete can secure a true American victory.

On the other side of the remarks and comments with racist-intonations, Mebrahtom’s victory was given due respect and accolade. “As Meb Keflezighi raced his final meters of the New York City Marathon on Sunday, he pointed to the USA singlet he chose to wear for the race. He did not point to a company logo; he pointed to the place he calls home. After breaking the tape, he crossed himself and sprawled on the pavement to kiss the ground that propelled him. This was a celebration-in-waiting. The gentleman runner had become the first U.S. athlete to win the country’s most celebrated distance race since 1982.” Brian Cazeneuve wrote for Sports Illustrated

The media furor regarding the Americaness of Meb’s victory has caused a lot of controversy in many circles and compelled some to conclude that: “Many people think that with an African-American president, we are in a post-racial society. Clearly, we are not.” As for Meb, he said that he has been dealings with such attitudes since he was a child. “I’ve had to deal with it,” he said. “But, hey, I’ve been here 22 years. And
the U.S.A. is a land of immigrants. A lot of people have come from different
places.”

eb” Keflezighi born May 5, 1975 in Asmara, Eritrea is an American athlete specializing in long distance running. He and his family were refugees from Eritrea via Italy to the United States. He became a naturalized citizen of the United States in 1998, the same year in which he graduated from UCLA. While at UCLA Meb received numerous All-American awards and other accolades.He won four NCAA championships during the 1996-97 season, including the cross-country title, the 10,000 meters outdoors and the 5,000 meters indoors and outdoors titles in track.

In the 2004 Summer Olympics, Keflezighi finished second in the men’s marathon, winning a silver medal in a personal season’s best time of 2 hours, 11 minutes and 29 seconds. Keflezighi finished 42 seconds ahead of Brazilian Vanderlei de Lima, who was leading the marathon until he was pushed off the course by protester Cornelius Horan. This was the first medal won by an American man in the Olympic marathon since Frank Shorter won the gold in the 1972 Olympics and took the silver medal in the 1976 Summer Olympics in Montreal.

Keflezighi lives and trains in Mammoth Lakes, California, and is a member of the Mammoth Track Club.[4] He attended San Diego High School where he won the state championship in the 1600 m and 3200  m.[5] Keflezighi won in both the 1600 and the 3200 meter races.
He won the 2009 New York City Marathon, setting a personal best of 2:09:15. Keflezighi was the first American citizen to win the marathon since 1982.