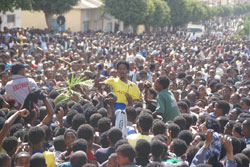 According to the cycling fe

deration, all or at least half of these riders will take part in the latest Tour of Eritrea edition. These riders are expected to line up under two different Eritrean national teams when the tour uncorks. A third mixed-up team could be formed with the remaining riders.

An Australian coach Mr. Radek Valenta will be heading the national cycling teams of Eritrea together with assistant coaches Dessale Negash and Yonas Zekarias. The Australian is in charge of the teams only for three months.

mpanied with their spare parts worth 7,000 USD. The National Cycling Federation in association with Sports Commission decided to invest on Tour of Eritrea 2009 as this year’s competition is a major bouncing step for the tour’s recognition by UCI.

Inviting at least five cycling national teams, setting only five stages and assigning an internationally accepted commissioner for the tour are some of the basic aspects for its recognition.   This will help the tour to be included in the UCI yearly tour calendar.

Different African national teams are expected to take part for the first time in the coming cycling Tour of Eritrea 2009. The UCI has already assigned a commissioner of the tour and fans are waiting enthusiastically for the day it unfolds.

The history of cycling Tour of Eritrea traces back to 1946. At the maiden Giro de Eritrea, as it was then called, 35 Italian riders took part in the 570 km cycling race that covered 5 stages. Only 12 riders finished the race. The tour was again brought to life on the occasion of the 10th national independence in 2001. It has been consecutively hosted since then.

Tour of Eritrea 2009 will be no different from that of the 1946 tour race. It is going to be a 5 stage tour race of about 550 km, to start with as an internationally accepted competition. However, it should be recalled that last year’s local tour competition included 9 grueling stages with a day off after five consecutive races of a total of 1178 km and an overall 11 climbing contests. It was a tour race that was held for the 8th consecutive year which covered a total of 1178 km.