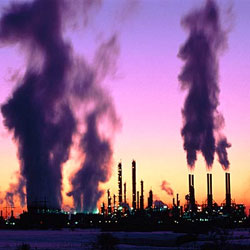 From Kyoto to Copenhagen: the decision on a new international climate protection agreement will be made at the 15th United Nations Climate Change Conference. The aim is to halve greenhouse gas emissions by 2050 and thereby stop dangerous global warming.The moment of truth will already be upon us in a few weeks. In mid-December 2009 delegates from practically all the countries of the world will meet in Copenhagen for two weeks of negotiations. It will perhaps be the biggest meeting that has ever taken place. The results of this conference will not only leave their mark on the face of the Earth; they will also influence the fate of hundreds of millions of people. The issue at stake in Copenhagen is the very foundation of their existence: protecting the Earth’s atmosphere from a dangerous rise in temperature.
If human economic activity continues at its present rate, the average global temperature on the Earth could rise by up to seven degrees Celsius compared to the pre-industrial era. Such a temperature increase would be faster and greater than the one the Earth experienced at the end of the last Ice Age about 15,000 years ago.

At that time the global temperature rose by five degrees – but over a period of 5,000 years. And there were natural causes for that change; this time around, humanity itself is

responsible for the change in the climate. We are burning too much fossil fuel – in other words, coal, oil and gas. We are destroying too much forest and farming our fields and meadows in the wrong way, in one that is harmful to the climate. If this doesn’t change, one in ten of the Earth’s approximately seven billion people could lose their homes to rising sea levels.

The danger has been recognized, but not overcome. As early as 1992 the Earth Summit in Rio de Janeiro forged an agreement under international law to stabilize green- house concentrations “at a level which a dangerous disruption of the climate system is avoided”. The Kyoto Protocol followed five years later, and about three dozen nations – most of the industrialized countries and the former Eastern bloc states- committed themselves to reducing, or at least limiting, their emissions of climate gases. But up to now, neither the promise made at Rio, nor the Kyoto pledge has proven effective.

Since the Rio conference, global emissions of carbon dioxide (CO2), by far the most important climate gas, have increased by almost a third to some 30 billion tonnes a year. The western industrialized countries that committed themselves to limiting emission in the Kyoto protocol have, in actual fact, slightly increased their output of climate gases since 1990. The only reason why the group of “Kyoto countries” have managed to slightly reduce greenhouse-gas emissions at tall on balance is because the economic collapse of the former Eastern Bloc countries led to massive and still- effective reductions in emissions.

It’s no exaggeration to say that humanity is currently tottering on the brink of a climate catastrophe. A catastrophe that would overshadow anything people might have suffered during the recent financial and economic crises, for example. People can somehow get over- and perhaps even make good – financial losses by making great efforts. But once the climate system becomes unbalanced, irreparable damage threatens. But if the danger is so great, why is it not being tackled with the appropriate urgency? Basically the answer is simple: it is not because no one knows how to tackle climate change technologically. Using energy more efficiently, replacing fossil fuels with renewable energies and changing our lifestyles are keys to solving the problem. The fact that these changes have not or have hardly been made lies in the fact that the challenges  seems superhuman, and that so far there has been no agreement on who should do what to overcome the problems.

As far as the scale of the challenges is concerned, climate researchers agree that humanity could just about cope with a temperature increase of some two degrees Celsius. More than 100 countries have now made the two degree limit their target, and the heads of state and governments of the G8 nations also signed up to it at their summit in L’Aquila, Italy. However, if there is to be any chance of this target being achieved, humankind can only use quarter of the known and economically accessible reserves of fossil fuels up to the year 2050- an enormous act of self-restraint. In other words, over the next four decades the emissions budget available to humanity totals 750 billion tones of CO2; it would be used up in about half that time if present CO2 emissions levels were to continue. And as regards the disagreements on “burden sharing”, the exigencies of climate policy are still predominantly defined in public debate in terms of what we will have to give up. In actual fact, the issue involves seizing the opportunity to gear our economic activity to climate compatibility. Today the industrialized countries, including the USA, are responsible for about half of the world’s emissions. So even if they were to stop emitting CO2 completely, the two-degree target would still not be assured, because emissions are growing in the developing and emerging countries. The target can be therefore only be achieved if the heavily populated emerging countries- in other words, China and India – also cooperate. Even so, per-capita Co2 emissions in China (4.3 tonnes) and India (1.1 tonnes) are markedly lower than those of the USA (19 tonnes) and Germany (10 tonnes). Furthermore, today’s industrialized countries, home to only 20% of the world’s populations, are responsible for three- quarters of the carbon dioxide that has been pumped into the Earth’s atmosphere since industrialization began, whereas the poorer majority of humankind have hardly contributed anything at all to the climate problem so far.

Combating climate change therefore also has to do with justice. If every human being has the same right to use the Earth’s atmosphere, the industrialized countries have already run up enormous “climate debts” vis-à-vis the south. They must not only settle these debts, but also lead the way in limiting emissions- and they must do it soon, since any delay would subsequently mean almost unattainable reduction in emission if the two-degree target is to be reached. The Intergovernmental Panel on Climate Change recommends that industrial countries reduce their emissions by 35 to 40% by 2020 compared to 1990. The relatively “innocent” nations are not prepared to make a serious contribution to protecting the climate until after the industrialized countries’ have made verifiable efforts.  This is the situation a few weeks before the Copenhagen conferences. However, the figures quoted by the IPCC pose a virtually impossible challenge- particularly from the point of view of the USA, by far the biggest emitter of all the industrialized countries.

The situation is different for Germany. Germany has even set itself the target of reducing emissions by 40%- and the chances of achieving it are not bad, because Germany is already half way there, having  cut emissions by a good 20% compared to 1990 so far. The Federal Republic will probably be one of the few countries to actually achieve its Kyoto target (a 21% reduction compared to 1990) by 2012 without spending taxpayers’ money on buying emissions rights from other states. Yet past successes are no guarantee of success in the future. German politicians will have to come up with something even better if the country is to achieve its 40% target. At the end of 2008 the two NGOs Germanwatch and CAN (Climate Action Europe) assessed the performance of the world’s five dozen or so largest CO2 emitters in the field of climate protection.  The analysis showed that no country deserved a prize; even so, Germany was close to the top of the list, just behind Sweden. One reason for the relatively good results is reunification. It suddenly exposed the former GDR’s emissions- intensive economy to international competition, leading to wholesale collapse. The result was high unemployment, but also rapidly falling CO2 emissions. Some observers say this reduction simply fell into the Germans’ lap and call it a “wall-fall profit”.

Yet there is more behind the success of Germany’s climate –protection policy. Above all there are the 66 sections of the Renewable Energy (EEG), which guarantees market access and minimum prices to producers of energy from sun, wind, water and biomass. This law has made Germany, which enjoys relatively little sunshine, the world’s number one in solar-power generation and number two (after the USA) in wind power. There are over 20,000 wind turbines in operation between Flensburg and Mittenwald. The EEG, a model for similar regulations in over 40 countries, dates back to the late 1990s when crude oil and other fossil fuels still comparatively cheap. “Green” energies would therefore have been in a much worse position than they are today- worldwide- without the boost this law gave them. In Germany itself they would never have reached their present share of the electricity market over 15%. Moreover, 280,000 jobs would never been created.

But it is also true that 280,000 jobs only make up 1% of total regular employment in Germany, so that talk of a “job miracle” is exaggerated. The boom in the sector is exclusively the result the government subsidies- and consumers have to foot the bill. Another astonishing thing is that the contribution to climate protection made by “green” electricity is statistically insignificant. The amount of CO2 emitted as a result of power generation has actually risen since 2000, even though the flagship of German climate-protection policy, the EEG, has increased the amount of zero-carbon electricity by 50 billion kilowatt hours. The problem is that the amount of electricity generated (partly for export) and the amount of electricity consumed have also increased at the same time, while the productivity of electricity use has virtually stagnated. In 2000 one kilowatt- hour produced goods and services worth 3.6 euros; in 2008 the figure was 3.7 euros. On the supply side of the energy market, Germany has been successful as a worldwide pioneer in renewable energies. However, comparable pioneering work still needs to be done on the other side of the market: in other words, when it comes to limiting demand. The fact that Germany is nevertheless in a good position as regards climate protection is exclusively due to lower emissions caused by industry, private households and transport.

The conclusion involves various facets, some important, some less important. It is less important to know how much climate gas Germany has prevented from entering the Earth’s atmosphere;  a couple of million tones of Co2- next to nothing in view of global emissions currently totaling about 30 billion tones. But it is nevertheless important that Germany has set off along the road to emission reduction. It id important for Germany itself, because “greening up” the economy is megatrend that is likely to be decisive for economic performances in the future. It is important for the world, because a highly developed industrialized country is clearly demonstrating something that is still not self-evident: that it’s possible to be economically successful without simply ignoring the rights of future generations.

The technological and societal solutions to climate problems only have a chance globally if this message is credible and if words are followed by deeds. Only then can the conference in Copenhagen be what it needs to be: a success.

ERITREA: Education for Self-Reliance and More Part I