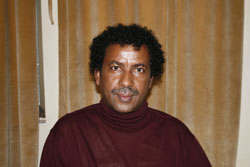 Sibrit cultural troupe is the national Eritrean musical group. Sibrit means heritage in Tigre and Hidarb. As its name indicates this group was established to represent and reflect the 9 ethnic groups’ traditional dances and songs. It performs and choreographs variety of shows in different occasions inside and outside the country. It has entertained audiences with a varied range of expressive performances and was awarded in several events, like in Libya in 1999 and July 2009 in Algeria. This cultural troupe is a real Eritrean asset that is endeavoring to preserve and revitalize cultural heritage in this era of globalization. Shabait interviewed, Mr. Kahsai Gebrehiwot, Head of Sibrit National Cultural troupe in PFDJ, excerpts follow:

Sibrit was formed after independence .How was cultural revival during the army struggle?

The primary objective of the armed struggle was to achieve Eritrean independence where the cultural identity of each Eritrean ethnic group would be celebrated and promoted. Parallel with the military combat in the fronts, more than 14 musical groups were formed in field as well as in the Diaspora from 1979 onwards. This artistic side of the armed struggle holds an important place in Eritrean history. It was not merely entertaining its audience, but at the same, conveyed a message of unity, hope, patriotism, resilience and inevitability of freedom. The artistic and cultural performance of the cultural troupes in those days had played a vital role in awakening Eritrean patriotism in different parts of the country as well as outside the country.
After independence, the Sibrit National Cultural Troupe was formed in 1992 to represent Eritrean cultural dance and song. Two years later it was reorganized with the current structure comprising of 10 singers, around 8 musicians as well as 12 dancers. The members are all some of the best in their fields in the country.

What is the primary objective of your troupe?

The purpose of this troupe is to artistically highlight and promote the cultural heritage of the nine different ethnic groups. It also disseminates values of liberation, freedom, and development and represents unity of Eritrean society besides its contribution to advancement of traditional art. We make research in all parts of the country to uncover the ethnic groups’ dressing style and other traditional artistic performances to effectively achieve our aim. In addition, Sibrit aims to familiarize Eritrean cultural performances on an international level.

What makes this cultural troupe stand out from other similar groups in the country?

We solely focus on traditional musical instruments. It is not commercial-oriented troupe; our profits are measured by the success we achieve in promoting cultural heritage in this era of globalization. Moreover, in collaboration with the National Holiday Coordination Committee, we perform in big events such as the May 24 celebrations as well as festivals inside and abroad.

Sibrit has won a number of awards in a relatively short period of time. Can you tell us the secret behind such recognition?

Eritrea inherited a number of traditions from both the Arabic and African cultures. In the Middle East, it is known as an alignment between the Arab and African world. We have a number of similar dances with Egyptian and other Arab countries. Besides, Sibrit depicts Eritrean diversity with variety of music instruments, several forms of movements, animal figures and other expressions within a relatively short period of time, which is what I think, enables us to captivate our audiences.

Do your members receive training in their respective fields?

Yes they do. We offer training to members in collaboration with foreign experts from China, Europe and the US. Especially with China, there are a lot of similarities between the peoples of our countries and China is renowned for its artistic representations. Their artistic finesse was amply demonstrated during the Olympic Games that drew great admiration from all over the globe. Thus working with Chinese experts can be very productive for us. Besides, such exposure promotes the capacity of the singers, dancers and musicians.

Can you tell us what your future plans include?