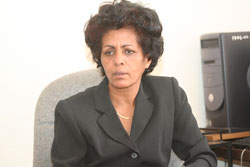 The National Union of Eritrean Women is about to celebrate its 30th anniversary from November 29 to December 1,2009 in Sawa. This celebration is being conducted under the theme: “The Youth Guarantee the Nation’s Future.” The women’s organization, which was established in 1979 under the umbrella of the Eritrean struggle for liberation, has more than 250,000 active members currently. Shabait conducted an interview with the President of the NUEW, Ms. Le’ul Gebreab regarding the upcoming celebrations and the overall activities of the union. Excerpts follow:

How are the preparations to celebrate the 30th anniversary of the NUEW  going?

Prior to the celebration of the anniversary, various workshops focusing on political, economic and social aspects of women were conducted in 6 regions of the country. The workshops focused on different issues such as women’s role in agriculture, education, leadership, rehabilitation, and health. The workshops were unique in their magnitude and the issues they covered. Similar workshops were also conducted abroad by Eritreans focusing on similar issues. Summaries of these studies and discussions will be presented during the celebration of the 30th anniversary. Besides, various programs highlighting the historical role of Eritrean women’s journey before and after  independence would be featured with special focus on their involvement in political, social and economic sectors.

As part of the NUEW’s endeavors to document the history of Eritrean women’s role in the armed struggle; it would open a wide opportunity for authors and artists to enlighten women’s contribution in detail in their work area.

When we commemorate the 30th anniversary of the NUEW, does it mean there were no movements or organized efforts speaking out for Eritrean women’s rights prior to 1979?

When we say NUEW was established in 1979, it means it was given official name and recognition then. However, Eritrean women’s involvement in the liberation struggle was strengthened and promoted since the early days of the armed struggle  Particularly in 1970s, the EPLF in principle believed and recognized the fact that women’s participation was a decisive factor in the struggle for liberation, which in turn provided a platform for the realization of women’s equal rights. Eritrean women from inside enemy territories as well as outside country had come to take part in the NUEW’s conference. The presence of a women’s union had played major role in encouraging women to become independent and voice their opinion.  It has also nurtured women who putt’s nation’s existence at top of priority at a cost of their life.

What about the women’s role after independence?

Women who once broke the glass ceiling won’t back to an old pattern of life. Of course the cultural impediments can’t be conquered overnight. Nevertheless with the support of the government a conducive ground is being laid in this respect.

Can you tell us some of the tangible changes registered in the struggle for women’s equality in the past 30 years?

The number of women’s participation in major decision making areas is gaining momentum which a clear indication that the desired change is on the way. Efforts to ensure women’s health, particularly in maternal health care service have seen a remarkable leap. As regards to education, most girls today go to school and adult women who have been denied that access have also been able to eradicate illiteracy. Furthermore, many women are now working in previously male dominated areas such as in construction process.

Likewise, to alleviate some of the hardship and health hazards women face, smokeless oven have been introduced in several villages in addition to the provision of potable water supply and mills. So as a result of the collaborative efforts of all government sectors and the NUEW, women’s situation in our country has seen remarkable change.

How do Eritrean women abroad contribute to NUEW’s efforts?

These women are continually working to strength NUEW through financial and moral support. Some have even built vocational training centers for women in Tesennei, Barentu, Keren, Elaberad and other areas.

Why would you say is the existence of NUEW significant for Eritrean women at present?

Until gender gap  created as a result of traditional attitudes is narrowed, the NUEW existence is vital to encourage women to fully exercise their rights with the government’s full support, advocate women’s right in all spheres of life and enforce women’s economic capacity. Gender issue is not merely the responsibility of NUEW but also the society at large.

Can we say that NUEW has been able to reach all women in the country?

nstant media campaign, drama, songs, sharing experience and other methods, yes we can say it has reached its main targets. I believe we have effected basic change and with the increasing number of educated and empowered women, we can hope for a bright future.

Why is the 30th anniversary being hosted in Sawa?
As our theme indicates “The Youth Guarantee of the Nation’s Future”, we give especial focus to young girls. And hosting the celebration in Sawa where young boys and girls are being nurtured is important in conveying our message as well as pass on the responsibility to upcoming generation of young women.