“Building a Society that Values Labor and the Laborer” 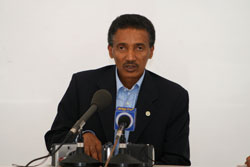 The National Confederation of Eritrean Workers (NCEW) is gearing up to mark the 30th anniversary under the theme: “Building a Society that Values Labor and the Laborer.” This celebration will be conducted from November 21 to 25 in Asmara. Shabiat has interviewed the Secretary General of the Confederation, Mr. Tekeste Baire regarding the upcoming celebrations and the general activities of the organization. Excerpts follow: What preparations is the NCEW making to commemorate its 30th anniversary?

Several study papers focusing on the exchange of experience between trade unions before and after independence, the past journey and future outlook of the NCEW, global economic crisis vis-à-vis labor and unemployment, as well as labor-related issues, among others will be presented during organized events.  Moreover, to further enrich the sharing out ideas, we have invited some of the former members, friends of the Eritrean Revolution, members of Hafash Widubat and partner associations. More than 100 expatriates are also expected to take part during the events.

Can you briefly tell us about the history of the NCEW?

Eritrean labor union began emerge around 1948 with the development of manufacturing factories in the country. From that period onwards, different unions were formed aimed at creating unity among all Eritrean workers as well as struggling for freedom.  The first meeting of Eritrean workers in the Diaspora was held in Germany in 1970 where Eritrean workers from Europe, North America and the Middle East took part. Then an organization known as ‘Eritreans for Liberation’ began to organize in different countries as the Eritrean Workers Union in1977. Finally, Eritrean workers from various parts of the world gathered in the liberated areas of Eritrea and conducted a congress during which the National Union of Eritrean Workers (NUEW) was founded on November 1979 in line with the principles of the EPLF. Following this, 2nd and 3rd congress was held in 1983 and 1988 respectively. After national independence, the NUEW organized its 4th and last congress that leads to the establishment of the National Confederation of Eritrean Workers (NCEW).

What about the role and contribution of the workers’ union in the Eritrean people’s struggle for liberation?

During the colonial period, Eritrean workers were subjected to harsh working conditions, law incomes, discriminatory labor laws, long hours of work and lack of opportunity for education. With the formation of political parties in 1940s, Eritrean workers began to actively participate in the movements for independence. Through time, they strengthened their unity and were able to lead their struggle in an organized manner. They were brutally assaulted and killed in times of protest against the suppression by colonial powers. Parallel to this, Eritreans in Diaspora were financially and morally supporting the armed struggle for freedom. Thus their committed contribution in the struggle for liberation forms an integral part of the history of the Eritrean people’s struggle.

What is difference between NCEW and NUEW?

The NUEW and other previous unions were founded amidst suppressive colonial oppression. It was natural for workers to prioritize uprooting colonialism since worker’s rights could not be seen in isolation from the rights of the entire society. Thus the primary objective of the NUEW was to achievement national independence. While in the post-independence period, NCEW was founded with a new structure and under different circumstances. Its main objective is to advocate for the rights of workers as well as their health and safety in the workplace. It also organizes meetings and collaborative programs so as to promote harmonious relations with relevant government bodies and organizations.

How is NCEW’s relationship with other organizations in the country such as the NUEW, NUEYS and others?

We share historical relations and ties with these organizations back from the days of the armed struggle period. We were all working for same cause and purpose. Though we are now working for different objectives and employ different strategies, we will share a lot of common grounds, particularly because both women and the youth are part of the work force.

What can you tell us about the confederation’s relations with other international labor organizations?

We have cultivated and developed strong links with the international trade union bodies through active promotion of relations. We have strong links with the International Trade Union Confederation (ITUC) and the Organization of African Trade Union Unity (OATUU) among others.  We also participate at the ILO annual conferences. Eritrea has ratified and signed the seven ILO conventions on social justice.  Moreover, we have bilateral relations with Denmark, Egypt, Libya and others.

Do you think the NCEW has succeeded in organizing all workers?

The organization process is moving at a commendable pace, but there still remains a lot to be done. We are generally guided by the International Labor Standard to mobilize all workers.

What can we expect from the week-long commemorative conference?

The objective of this symposium is to evaluate the 30 years of experience and thereby create viable grounds to map out concrete future plans. It would also provide a platform for participants from other countries to know and share the experience of Eritrean workers. Eritrean workers possess a rich history, particularly during 1940s and 70s.
The different study papers expected to be presented would also broaden and highlight the importance of cultivating productive and skilled workers. The overall sharing of experiences will further enable us to overcome challenges.