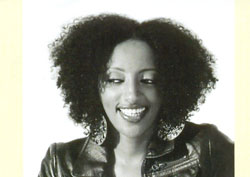 “We had a very diverse upbringing among many different people and cultures,” she remembers, “We also studied at international schools and spoke different languages. I was exposed to the arts at a very young age, music and dancing in particular, which were quite common at my home.”

Dina grew up in the UAE as part of a small Eritrean community that met regularly. “ My parents made sure that we knew of our heritage” she explains, “ They were very passionate about Eritrea”.

Her experience of visiting Eritrea for the first in 1993 at the age of 15 is similar to that of many Eritreans raised abroad who had only seen it in photos and videos.

“I was so proud to be a part of such a wonderful place. It was everything my parents had told me about. I was so happy to be around my own people and to find that my siblings and I weren’t the only ones who were raised elsewhere.”

After studying for her A levels in London for two years, which she counts as among the best years in her life, she eventually made her way to America, which has been her home for the last twelve years.

Dina’s love for fashion started from her young age. “I always loved clothes and models, thanks to my father. He was our personal stylist at home and I remember visiting gorgeous boutiques where he’d pull out all the clothes in front of me, showing me the details on them and how great every thing was made.”

Although she did some small scale modeling in UAE and UK, which she decided was not for her, it was a while before she reignited her love of fashion and it certainly was not the most obvious choice of career for her.

Growing up, Dina thought about being a surgeon, engineer, tennis player, and actress. For a while, she thought seriously about being a lawyer and pursued business law-which appealed to both her natural business sense and her love of public speaking. She went as far as enrolling for a business law degree in Virginia however, one week into the course, she bravely decided to drop out and enrolled on a liberal program instead, steering her future in a different direction.

Dina’s tenacity is evident in the way she guaranteed herself a place at the prestigious Fashion Institute of Technology in New York, the teaching place of designers such as Tommy Hilfiger, Nautica and Calvin Klein.

Upon visiting the university and being told that she may not have a place there, she spoke with the chairperson. She insisted that she would not leave until she received an answer as she had traveled a distance with her mother, who would shortly be leaving the country. She further told them that they had to accept her as she was an “A” student and knew that she could do the course.

Dina questioned people’s reservation about her decision to drop out the law, which was seen as a firm career choice. “Success to me is being able to do what you enjoy,” she explains. “For example, my father was always very passionate about his job right up until the end. I wanted to emulated this passion and not just something because others thought it was right.”

Since graduating, Dina has worked hard in the fashion industry as an assistant stylist working with respected stylist Suzette Lavalle, an associate designer and senior designer, before venturing out on her own.

Her own label DMDstyle begun as a line of tank tops (vests), before progressing into a whole collection. She was invited to showcase this collection at the launch of the Dubai Fashion Week in 2007.

Over the last two years, Dina has put her fashion line on hold, focusing on styling and has worked with prominent photographers, models such as Katerena Alkhimova, Lisa Jackson from America’s Next Top Model and celebrities including Kelly Carlson, from TV’s NIP/Tuck, the movie Made of Honor and British actress Holly Weston.

She has also had several covers published in magazines, has built relationships with fashion houses such as Prada and Custo Barcelona and is fast establishing herself. The key to this, according to her, has been “ a lot of persistence and networking as well as patience”.

Dina cities her parents as being her biggest inspiration in her career. Although they were initially surprised and worried about her decision to drop out of her Business Law course, they were supportive when she showed that she was dedicated to making a career out of fashion.

“They offered me their blessings and always told me they were proud of me taking on wait I have,” she says. “They alone have kept me going up until today.”

When she is not working, Dina may be found relaxing in Union Square, New York City, which is home to her favorite bookstore as well as her favorite vegetarian restaurant (she’s a pescatarain). She also loves the arty Williamsburg area in Brooklyn, the borough in which she lives. Her own clothing style is quite simple and she loves wearing “jeans, a basic white tank top, vintage high-heeled boots and my aviator sunglasses”.

“I hope to continue with my styling and get into costume design in movies and music videos,” Dina says. “I also want to pursue my clothing line and become involved in the African Fashion Scene and help with developing it and creating more jobs. We’ve such great talent there that shouldn’t go unnoticed.”

Dina also plans on becoming involved in humanitarian work; particularly in literacy programs for women in Eritrea and explains, “ I want to impact the world and people I interact with through my work, and hopefully I can make a difference.”

You cannot help but be left with the impression that Dina will follow through.

Our National Associations: Source Of Our Pride