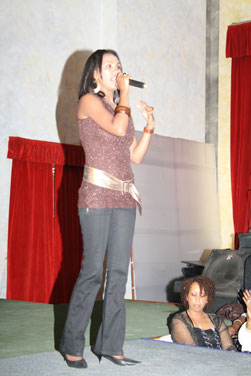 Artist Senait Amine is one of new blooming Eritrean singers overwhelming audiences with her amazing voice. She and her husband were members of Aser Musical Band. She studied music for four years in Asmara Music School. Her singing career has since then taken off and she recently released a new album. Let us start with your background?

I was born in 1985 in the town of Dekemhare. Since my father was a freedom fighter, my mother took me and my sister to Sahel, where we stayed in a place called Badm until independence.

How about your life in the post-independence years?

Life wasn’t easy for me and my sister after independence; my father was martyred before he was demobilized and my mother also died shortly after him, my sister and I become orphans at an early age and we were sent to live in an orphanage.

During my childhood, my father loved the song ‘Lewhata Keren’, and I used to repeat it after him.  But I started singing in earnest while I was in the orphanage. We used to stage various artistic shows to entertain visitors who came to visit martyr’s children and other occasions. I remember also when Adhanom (Arefa) was teaching music to ‘C.H band’, I used to cry the whole day because I wasn’t allowed to learn with them. I loved singing from early on, even if I did not understand what music was.

When did you believe that you could release an album?

When I began singing in different public occasions, it boosted my confidence. At the same time when people started to like and appreciate my performance I felt I had to do more and work harder to satisfy them better. In addition to this, there was a plan by the ‘Aser Band’ to do a series of albums prepared by different band members. The first album released was called ‘Tesfa’, prepared by Girmay and Feven. And I together with another colleague were to release a second album but unfortunately that did not happen. After this I decided to publish my own album.

Have you ever though that your new album ‘Ajbeni’ will gain such popularity?

Yes, we did. We had high hopes that people would like it. But of course people’s admiration was beyond our expectation.

Do you have other hidden talents that we don’t know about, besides singing?

Yes, I was a volleyball player but I didn’t pursue it.

What advice would you give to young women to be successful?

If a woman has a clear vision for her future and has the self-confidence and strength to overcome challenges, then I guess there is nothing that can stop her from achieving whatever she wants.