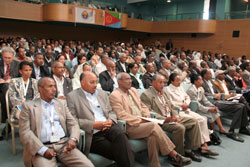 Begining from the days of liberation struggle, social, economic and political independence and self-reliance was the guiding principle of Eritrean leadership. To achieve an all round development based on the principles of self-reliance, it is imperative to cultivate a hardworking society that values work. Any given nation’s development aspirations can only be secured through the toil of a workforce that is committed to achieving the set goals and values the contribution of all individual workers. To this end the Government of Eritrea has been exerting vigorous efforts to build a strong economy through strengthening internal human capabilities. Consequently various opportunities have been provided for workers to promote their creativity, knowledge and organization so that they can enhance their productivity and effectively address challenges that arise along the way. Such investment towards social transformation is vital in stepping up the efforts to secure prosperity. It is with this vision that the National Confederation of Eritrean Workers (NCEW) is commemorating its 30th.

The first day of the symposium marking the 30th anniversary of the NCEW under the theme “Building a Society that values Labor and the Laborer” was opened in the presence of President Isaias Afwerki, Ministers, Ministers, PFDJ officials, religious leaders, army commanders, religious leaders, members of the diplomatic Corp and invited guests took part, during which cultural shows on the role of Eritrean workers was featured.

Speaking at occasion, President Isaias conveyed his congratulations to the people of Eritrea in General and to the members of the NCEW in particular and stated that the Eritrean workers movement is one of the crucial segments that played a critical role in the different stages of the Eritrean people’s struggle for independence, both before and during the armed struggle for liberation. The fact that the workers union was established 12 years before the achievement of independence was aimed at emphasizing the role of workers.

The history of social working class in Eritrean traces back to the advent of Italian colonialism. During that time there were more than 13 factories with over 42,000 workers. Workers became a significant conscious force of the society some of which them were admitted to higher administrative position. In 1949, railway workers went on strike opposing colonial oppression for the first time in the history of Eritrea which lasted for about a month.
Over the years, Eritrean workers’ organization gradually grew into a force to reckon with, assuming a cohesive structure around 1977-78. The commitment of Eritrean workers in the factories established across mountains and valleys during the liberation struggle also attests to their decisive input.

Eritrean workers’ union conducted its founding congress to establish the National Union of Eritrean Workers (NUEW) on November 1979, in then liberated area of Arag. This union went on to reinforce its organization and played an important role in strengthening the participation of workers in the liberation struggle. In 1983 and 1988 the NUEW held its 2nd and 3rd congresses respectively. After independence, the NUEW reorganized itself and held its 4th congress which led to the founding of the NCEW.

Composed of 5 federations of workers, this confederation was setup with new objectives and organizational structure to meet the challenges of the post-independence situation. Its primary objectives included enabling workers to enhance their social status, fulfill their duties and struggle for their rights, unity as well as expand their solidarity through national and international relations.

The symposium that is currently underway is expected to enable the NCEW to evaluate its past experiences and future plans. In this regard, President Isaias stated that in line with the founding and enduring pledge, the workers union should strive to cultivate a workforce equipped with the necessary training and technology and also empower workers to become socially, politically and culturally aware so that they can shoulder their due responsibilities, thereby boosting overall productivity. Indicating that freedom, national development and economic emancipation should be anchored on work, President Isaias wished success to the workers union.

The General Secretary of NCEW, Mr. Tekeste Baire on his part said: “In view of the fact that the history of Eritrean workers is an inseparable part of the popular political movement, it did not only evolve with rich experience acquired in different stages both at home and abroad but it also maintained close ties with national associations of students, women and farmers, as well as international workers organizations, and as such constitutes its strong side.  The National Association of Eritrean Workers played a decisive role in the realization of national independence thanks to the organization and strong bond cultivated in the process.”

Considering the importance of the past experiences of struggle, victory and challenges, the NCEW is commemorating its 30th anniversary to properly document the historical significance of such unique experience. Documenting the history of such rich experience will make them more alive and easily accessible to successive generations.

The created favorable atmosphere that reinforces the culture of hard work and national economic emancipation on the basis of the principle of self-reliance encouraged the NCEW to outline a sustainable road map for future endeavors. Regarding their future plans, Mr. Tekeste said that the NCEW has prepared a five year work plan and is set to strengthen its organization. Moreover, the NCEW is hosting this event to harness mutual vision with national and international organizations as well as the government.

During the occasion, messages of solidarity were conveyed by the representatives from workers’ unions of 10 different countries.

In the evening hours of the first day of the symposium, the participants were invited to visit the photo and art exhibition displayed at Expo New Hall. Finally the participants were entertained by cultural show of Eritrean musicians from North America, Europe and the Middle East called ‘MeQalh’ as well as Sudan cultural troupe at the Asmara Municipality Hall.

During the five-days of symposium, several study papers will be presented and cultural troupes from inside the country as well as from North America, Europe, Middle East and Sudan and Kenya are expected to provide entertainment.

Good Neighborliness: Choice With No Substitute