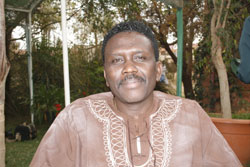 Federico Imberto is one of the senior Eritrean musicians who live in the Diaspora. Having had a musical background from his childhood, Federico has created a number of great musical works over the years. Many people know him by his name and the one Kunama song he sang in two decades back; but not many know his real artistic works. Events bring people together and Federico performed an amazing musical show at the recent NCEW symposium held from 21 to 25 November, 2009. Shabait conducted a brief interview with the Eritrean artist, excerpts follow:

Please tell us a little about your background?

I was born in 1961 in Barentu, Eritrea, where I studied my elementary classes, but I was moved to a missionary school called “Zera’a Kihnet’ only when I was a second grade student and stayed there till 1975. Around 1978, I joined the Eritrean struggle for independence, where I stayed until 1986. After that I moved to the Sudan and then to Germany and now I live in the Netherlands.

How about your musical work, when does it begin?

It began when I went to the missionary school, which is when I was an elementary student. Taking musical classes was compulsory, so I would say that is where I began studying music and playing instruments.

Did you immediately start playing for bands after you left the school?

To be honest, I only had theoretical knowledge of music when I left the school; of course I could play instruments especially the guitar, but I didn’t dare to play with bands. The reason is because I thought it would be inappropriate to use my musical talent out of spiritual purposes; that is how we were brought up at the missionary school.

So when was the first time you started playing with bands?

As I told you, when I joined the struggle, they picked up on my passion for music and they assigned me to a cultural group. So I started playing more and my first song as a performer was a song in the Tigre language. You know my mother tongue is Kunama but because I left Barentu when I was a child I couldn’t master the language to a level where I could use it as an artist.

Does that mean you don’t sing in Kunama?

No of course I do. I began mastering the Kunama language soon after joining the armed struggle and I have this very popular song called “Femun Gadi”.

Can you tell me more about your musical experience?

It was when I was living in the Netherlands that I pursued music as a profession. Of course I had a pretty good experience from my time in the struggle as well as with some Sudanese musical groups, but I wanted to take my experience further when I went to Holland. And so I started composing music for various Eritrean artists.

So you are not into singing anymore?

Well, I would rather say I leaned more into music arrangement but I do sing as well.

What special accomplishment stands out from your career in music so far?

Apart from arranging music and singing, I am actually engaged in doing research on the scale of traditional Eritrean music from its beat to the melody. In fact I have given names to some beats and melodies that I found to be unique. There is this TRT style I named after Tewelde Reda, one of the veteran music legends in Eritrea. And also the free way style I recognized in the Tigrinya play and called it Ishim. It is like the Reggae or the Cha-cha; they just identified a beat and gave it a name for international recognition. So that is basically what I am trying to do.

What do your future plans include?

Well, I want to comeback to my country and share my musical experience with my own people.