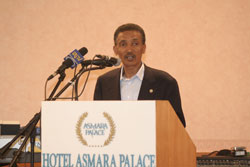 The commemoration events of the 30th anniversary of the National Confederation of Eritrean Workers came to a colorful conclusion on 25th of November at Asmara Palace Hotel in the presence of invited guests, ministers and participants. The Minister of Foreign Affairs, Mr. Osman Saleh and Minister of Transport and Communication, Mr. Woldemichael Abraha handed out gifts to high government and PFDJ officials, ambassadors, administrators and individuals who made contributions to the development of NCEW.

Addressing the participants on the closing ceremony, Secretary General of the Confederation, Mr. Tekeste Baire said that the commemorative occasion represents a moment of pride for those patriots and expatriate friends who fought firmly for Eritrean independence.

The second day of the commemorative events, November 22, began with Eritrean Oral and Handicrafts presentation by the Head of Cultural Affairs at the Ministry of Education, Mr. Solomon Tsehaye. The oral poetry presentation gave participants an insight as regards traditional Eritrean values in relation to work. Following this, several papers were presented focusing on the struggle of Eritrean workers to ensure their rights and independence, workers journey within 18 years of independence and global economic crises, among others.

In a paper he presented as regards to Eritrean experience in political and economic development, Mr. Yemane Gebreab, Head of Political Affairs at PFDJ, explained that current political and socio-economic experience in Eritrea is a continuation of similar experience accumulated during the armed struggle. The lack of any regional or superpower support to the Eritrean people’s struggle has enabled the Eritrean people to depend solely on their resources, he added.

Addressing the issue of workers rights has been given due attention since the days of liberation movement as part of the efforts to ensure social justice and equality. From the early days of independence, the Eritrean government legislated the 1st labor law in September 1991, only four months after independence. Moreover, Eritrea became member of ILO in June 1993 realizing the importance of working with the world community to support the rights of workers and employers universally.

Director General of the Labor Department at the Ministry of Labor and human Welfare, Mr. Woldeyesus Elisa, presented study paper titled “Labor Law to Ensure Workers Rights from Eritrean Perspective”. He gave extensive briefing on the government’s effort’s to ensure workers’ right through adopting different articles from the ILO.

Furthermore, Mr. Tsegai Mogos, Deputy General Secretary and Head of International Relations in the NCEW presented a study paper on the Eritrean workers experience in the post-independence period. He said that the workers union has reorganized into 5 federations i.e. textile and leather, chemical, mining and general workers, food and drink, service rendering industries, as well as transportation and communication workers federations.

Following this, study papers under the heading of Global Job Pact, The Way Forward, HIV/AIDS and Gender mainstreaming, Global Economic Crisis and Its Challenges to Unions were presented by representatives of unions from different countries.

On the third day, President Isaias Afwerki held a meeting with over 100 foreign participants of the symposium at NCEW’s Hall. He gave briefings on the objective political and socio-economic situation in Eritrea and the region as well as other significant issues.

President Isaias pointed out that the symposium is aimed at serving as a discussion forum for seeking ways of resolving the complicated issues being witnessed in the region. In this respect, he stressed its significance in exchanging views towards enhancing relations among countries of the Horn of Africa, in addition to registering forward march.

In the evening hours of the day, invited guests visited Za’er textile and Asmara beer factories during which they received briefing on the mode of operation and production of the factories. The participants also conducted a tour in the Easter coast of the country including the port city of Massawa and the island of Dessie.

An NCEW effort to organize and strengthen the working force in the country in collaboration with relevant bodies continues to make significant contributions in realizing national economic emancipation programs. Indeed the commemoration event even created an excellent platform for the union to evaluate the past journey and move forward.

Eritrea At A Glance V