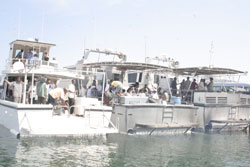 After three days of successful deliberations and presentation of papers that concern labor and laborers, the National Confederation of Eritrean workers organized a tour to the port city of Massawa for the foreign participants of the conference and Eritreans that came from abroad.

Around 100 participants took off early in the morning on the 25 of November to the port city which is located 103 kilometers east from the capital Asmara. The road to Massawa is steep and full of hairpin twists and turns, which makes the drive slow. But the scenery along the way, the old railway system, the tunnels, and the small villages seen along the way in the strips of the cliffs represented quite a site. After a couple of hours drive around noon, the visitors finally arrived in Massawa but the trip did not end there.

Three boats were waiting for the tourists ready to cruise the Red Sea to an island called Dessie, around 33 kilometers from Massawa. Everybody had to get onboard as soon as we got there; besides the lunch was hosted in the island. The sea travel was even better and marvelous. The sea was calm and the crystal clear, the Red Sea was shimmering from the reflection of the sun, coupled with the birds and small fish abundantly seen along the way; it was an extraordinary trip.

After 75 minutes of cruising, the boats finally arrived in the island but most of the travelers said that they wouldn’t have wanted the sea trip to end. “It was incredible, I have traveled by sea a number of times but to be frank this one was among the best”, were the words of a Senegalese traveler with the group.

Lunch was hosted there in a new hotel owned by an Eritrean entrepreneur. Every single thing was wonderful, especially the meal which included fresh fish from the red sea and even the scenic beauty of the clear shore and clean beach sand around. Another member of the travelers group is an Italian member of the ILO and she said, “My father was born in Eritrea and he carried good memories from here when he left. I really am sure he would be very happy if I could bring him here. It is indeed a place to see”.

The boats started cruising back to Massawa around five in the afternoon. By then, dusk had started to set in. The sun that was overhead began to turn red and the reflection portrayed in the middle of the clear sea was magnificent. It was indeed a long day, but most definitely well worth it.

The boats docked in Massawa around six thirty, but again, dinner reception hosted by the administration of the Northern Red Sea region was set for eight o’clock. After a brief welcoming address from the administrator, dinner was hosted and to make the day extraordinarily beautiful, a group of Eritrean artists from different corners of the world staged their performance.

They called it the sound of three generations. Legendary singers and musicians from the sixties, from the eighties as well as two new young talents whose names are rocking all over Europe staged an incredible performance and marked an unforgettable night for the participants.

The exhausted bodies had to rest after the party was over and prepare for the next day to witness more expedition on the way back to the capital. At daybreak, the organizers arranged plans with the national museum of the northern red sea regional branch for the tourists to pay a visit. By touring the museum, most of the visitors agreed to the point that they were able to know a lot about the region’s history in just a few minutes.

The main aim of the tour was to introduce the visitors with some scenic parts of Eritrea and show them the promising business ventures by doing so. The most important area when it comes to business in Massawa is the newly set up free economic zone. Director of the free zone authority gave the visitors a guide around the site and articulated the potential economic resource there.

Following the tour in the zone, the minibuses started their way back to the capital but through the Filfil road for one last adventure. The newly constructed road encircles its way up to the summit of mountains and the area around the way is know for its rich farmlands, forestry, wildlife and streams. It has two rainy seasons in one year; one from the highland plateaus and the other with the coastal plains.

Mr. Tewelde, an Eritrean who came from France said concerning the entire trip, “This is just an incredible event. First we came to celebrate the 30th anniversary with our partners and now we were able to meet our friends from 25 years back and enjoy our tourism resources with them”.