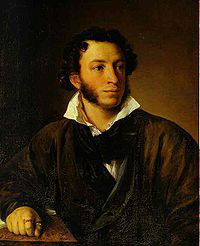 He is renowned for his compositions that are laden with great depth and meaning. His poems are insightful. He is remembered for his unmatched contribution in shaping the Russian literature. His contributions have influenced many prominent Russian writers. His works remain to date unparalleled in the world literature—Alexander Pushkin (1799-1837).

His African origins has never been denied or doubted; nevertheless, since many countries claimed that he belonged to them, different distortions arose that delayed the identification of the exact place of the origins of his maternal great grandfather.

Last Saturday, 28th November 2009, an official inauguration of Pushkin’s monument was held in Eritrea, near the Asmara Public Library, and it is anticipated that it would put an end to the prevailing contradictory information regarding his origins. The statue that was erected in the honor of the memory of this classic writer will also help in inspiring young artists. He will definitely become an embodiment of artistic excellence and a source of motivation the same as the Greek muses used to be. People will have an enviable experience projected before them.

During the occasion Mr. Solomon Tsehaye, Head of Culture, Arts and Sports at the Ministry of Education, recited Pushkin’s poem titled, in its Tigrinya translation, Hawelti—meaning monument. The poem predicts that Puskin’s extraordinary talent in describing the plights of the common people will always be remembered and he will live forever for he will affect the hearts and minds of the disadvantaged. The poem goes

on to elaborate that though death is inevitable he would leave ever-living monumental works after him.

Indicating such an event could be a groundbreaking moment to reinforce the ties between the two nations, Ms. Elena Drapeko, member of the Russian Parliament, noted that she feels honored to be part of the occasion. Moreover, she revealed that Pushkin was proud of his African origin and he remembered his mother’s grandfather —Abraham Hannibal with great pride.

Another Russian participant in the inauguration ceremony, Dr. Sergey Kotelnikov, an instructor in Eritrean Institute of Technology, pointed out that the erection of Pushkin’s monument here in Asmara is important for the promotion and development of culture.  He also commended those who selected the place for the monument. “It is a best place, a great poet in front of the library, he is sharing his skill and knowledge with other people,” he said.

Pushkin’s writings have a universal importance that transcends time and takes a reader to a higher realm of varied emotional experiences. With this regard Mr. Teklay Minase, the Eritrean Ambassador to Russia, pointed out that the idea for the erection of the monument arose not just because of his origins but due to his great contributions that are an ass

et for the entire world. Hence, prior to such initiatives to establish a monument commemorating his huge achievements in the field of literature, there was a plan for naming one of Asmara’s streets after Pushkin. “However, as some interested Russians became involved, they became a driving force to the realization of this event,” the ambassador added.

The ambassador went on to elaborate that the great event would create an opportunity for the Eritrean writers to explore his works and became great writers as well. As regards the translation of Pushkin’s works into Tigrinya, the Ambassador said: “Preliminary initiatives of translating Pushkin’s works have been started and one or two of them have been published and distributed to be digested by the reading public. Besides this, the Cultural Affairs of the PFDJ’s is working on translating more and more of his works. Moreover, there are plans to establish Puskin’s memorial museum and library for Russian literature in the near future.

Mr. Tewelde Kelati, the Administrator of the Central Region, on his part said that it was an occasion that narrows cultural and geographical gaps.

During the evening hours of the day, the Sibrit cultural troupe showcased different performances that added further color to the event.