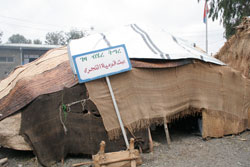 The Eritrean people lead their lives as farmers, pastoralists and businessmen. But, the majority are agriculturalists. Most of the houses in rural Eritrea are constructed in the traditional way using construction materials obtained from the surroundings such as soil, dried branches oor longs, ropes, stones and mats. They are mainly hedmo (adobe-looking dwelling place found mainly in the highlands), agudo (thatch roofed hut common in the lowlands), agnet (a sort make-shift nomad tent, preferred by nomads) and mereba (stone house with corrugated iron sheet for roof) built by skilled masons.

The nomads among this ethnic group construct agnet for temporary dwelling. In some places, the agnet is also used among non-nomadic people. The agnet is a semi-circular hut without any particular door and no doors. The constructing materials needed for constructing materials needed for constructing Agnets are the following: long dried branches, mats or quilts, ropes for keeping the mats or quilts stretched and pikes thrust into the ground to hold the construction firm. Among this ethnic group, the men are expected to prepare the building materials wile the women do the construction work. In the past, the Agnet was draped with animal skins inside and outside, but with the introduction of capitalism, the demand for animal’s skins in factories increased and as a result the agnets had to be covered with mats and quilts only instead. Since mats are waterproof, light and full of holes for ventilation, they are more preferable by nomads than skins. However, the agnet being small in size, a man having more than one wife is obliged to construct more agnets.

meadeni are constructed through village cooperation, mereba is build by skilled masons. The one who has a house constructed is expected to bring porridge, butter and coffee to the site.

For example, in Herghigo while the rich lived in mereba and well-ventilated wood-houses, the poor lived in meadeni. Even among those who lived in agnet, while the poor man’s agent was covered with two or three mats those which belonged to the rich were covered with seven or eight mats.

As to the life-span of the buildings, the agnets last only one year while the agudos last more. The meadeni however last from 5 to 10 years provided it is repaired from time to time. The wooden-houses of Massawa and Herghigo are often eaten by termites and unless insecticide is used for their maintenance, they are certain to crumble down before their due time, which is no more than 10 years.

While agudos need yearly change of fresh grass, the hedmo needs a new supply of soil to be put on the roof yearly. It also needs a constant repair of its walls.

Meadeni has three windows and two doors. In Hirghigo, the doors are made to face east in order for the occupants to get brisk sea breeze during the hot season, and the latrine, an open ground in the middle of the meadeni is often situated behind the main room. The moment the open refuse is full, it is carted away. But some meadenis have their latrines dug in the open yard behind the main room, and as often as the holes are filled they are covered with earth and new ones are dug nearby. However, among several other communities, the open field serves as latrine for the public.

The Tigre communities found in Heirghigo, Dekemhare, Nefasit and Massawa use rather modern household furniture and utensils. The rest use traditional utensils such as wickerwork, gourds and earthenware, due to lesser contact with city life.