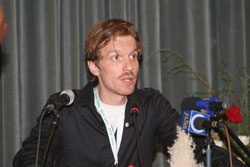 During the armed struggle for independence many foreign journalists and researchers had come to the liberated areas of Eritrea to document and personally witness the facts on the ground as regards the Eritrean people’s struggle. One such foreign journalist was a Swedish photographer, the late Mr. Goran Assbring, who came to Eritrea for the first time in 1974 to document the armed struggle for liberation.  Mr. Goran came back and forth to Eritrea since then until he was killed in 1983 during one of his trips leaving a wife, twin daughters and a son behind. His son, Mr. Kalle Assbring who was only 8 and half years old at that time was invited as a guest to participate in 30th anniversary commemoration of the National Confederation of Eritrean Workers (NCEW). Mr. Goran Assbring’s photos were displayed at the Expo Hall for the participants of the symposium. Shabait conducted a brief interview with Mr. Kalle Assbring regarding his father’s work and his impressions. Excerpts follow:

Can you tell us something about yourself?

I was born and grew up in Stockholm. I am 34- years- old and I am photographer. This is my second trip to Eritrea and now I came at the invitation of NCEW.

What was the purpose of your first trip?

I came as a tourist to visit my father’s grave which is in Girmaika and meet some of the people who were with my father in 1983. My father was shot while he was in a car at the age of 33. I met the people who were sitting with him. It is good that I came because I was able to satisfy my curiosity, it was a very strong emotional situation for me.

Your father died when you were very young, do you know what he was trying to do for the Eritrean people’s struggle?

I think he was trying to awaken the outside world about Eritrea’s real image and cause. At that time a lot of financial support was given to Ethiopia when the country was hit by drought and the money was used for purchasing weaponry. My father was trying to disseminate the truth about what was going on.

How your father’s death so far away from home did affect you and your family?

My father’s experiences and death in Eritrea is part of my life and it has shaped my life greatly. At first my father’s death was terrible news which took quite a toll on the family, but as with all bad experiences in life we learned to accept it. There is a large Eritrean community in Sweden and from my childhood I grew up close to Eritrean classmates and Eritrean people. So Eritrea has been part of my family’s history and I feel strongly attached to the country and its people.

How does it make you feel as a son what your father has done?

I feel very proud seeing that he is being remembered for his efforts to find out and expose the truth. He had sacrificed a lot in his career. I wish he was alive today but at the same time, I am happy to hear young Eritreans named after my father and his name is easily recognized among those who know about Eritrean struggle.

Was it your father’s influence that you became a photographer?

I never thought that I would become a photographer or follow my father’s foot step. I think it just come naturally for me since I was surrounded by a lot of cameras and my father’s extensive work.

How do you think your father’s photographic work is related to Eritrean workers’ history?

Most of my father’s photographic work in Eritrea was about the daily routine of people behind the frontlines. It wasn’t about the ongoing war or bombs. It was a picture of factory workers and their daily life. And I think that has connection with workers’ history.

Have you done any work relating to Eritrea?

Well, I am trying to exhibit my father’s photographs and take pictures of young Eritreans named after my father.

Tell us about your father’s book?

My father died before he could publish his book and his colleagues compiled and printed it in 1986 under the title Assbring in Eritrea. The book is about his photographic works and historical facts of Eritrean struggle. When I came to visit Eritrea, I found out that Eritrea was quite different than the picture I had in my mind. I had pictured Eritrea according to my father’s pictures which were taken before independence.

Any future plans in relation to Eritrea?

I would like to come back soon and travel a lot around the country. Asmara is more beautiful and the people are very hospitable.