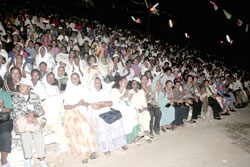 The 30th anniversary of the National Union of Eritrean Women (NUEW) was celebrated colorfully in the Sawa Vocational Training and Education Center from November 29 to December 1, 2009. The historical occasion that was commemorated under the theme of “Youths: Guarantee of Bright Future” was opened in the evening of November 29 where President Isaias Afewerki, Ministers, senior People’s Front for Democracy and Justice (PFDJ) officials, Army commanders and religious leaders, as well as invited guests from inside the country and abroad participated.

President Isaias Afewerki congratulating the entire Eritrean people particularly women of the country; said, “Few experiences in the history of the contemporary world could compare with the heroic feats and fortitude of Eritrean women during the armed struggle for independence, and hence their role does not need any further embellishment. The Eritrean people’s greatest and most proud struggle for freedom would indeed have been incomplete without the active participation of women.”

The exceptional historical feat of Eritrean women is an integral part in the history of women of the world. Eritrean women have proved their rights through revealing their capability in the battlefields and severe circumstances by standing alongside their brothers. They had proven that the societal misperceptions against them were wrong. They had reinforced their organization through the foundation of a National Union of Eritrean Women owing to the encouraging ground laid by the Eritrean people’s Liberation Front (EPLF). Their inputs were further enhanced in all activities of the armed struggle. After independence the Women’s Union has resumed its advocating responsibility for gender equality and is able to register enormous achievements.

Prior to the main occasion of the 30th anniversary of the union, it had conducted 6 workshops in all regions of the country regarding vital issues concerning women. These workshops were necessary in assessing the current status of women in Eritrea, map-out effective programs, as well as strengthen their organizational capacity. And now, the successful commemoration event of the union was significant in reminding the whole society to renew their pledge to work for gender equality.

President Isaias also pointed out that the need for taking intensive action towards ensuring socio-economic prosperity on the basis of qualitative and productive, as well as fair and effective division of labor. “The task of nurturing the desired culture and political state of affairs should be targeted towards achieving the set goal.” President Isaias added.

Also speaking at the celebrations, the Chairperson of the NUEW, Ms. Leul Gebreab, indicated that the Eritrean women’s movement is one of the major organizations that enabled the liberation struggle to have a popular base.  She further stated that such enthusiastic celebrations reminds the Union to renew its pledge of preserving the achievements registered in ensuring gender equality and rights, besides working diligently towards securing still more gratifying accomplishments.

Noting that the major role the NUEW played in the struggle to achieve independence and towards ensuring women’s rights is an integral part of the nation’s glorious political culture and history, she explained that unremitting efforts would be exerted in strengthening the activities being undertaken by female youths to this end, and thus ensures a bright future.

Likewise, in a message of solidarity she conveyed on the occasion, the Member of the Russian Parliament and Deputy Head of Tourism and Cultural Affairs, Mrs. Elena Drapeko, lauded the struggle of the Eritrean women. She went on to say that the progress being made towards ensuring the rights of women in Eritrea is quite vivid.

On the second day of this celebration the participants held extensive discussion divided in three groups. Issues focused on under age marriage and Female Genital Mutilation (FGM), women’s role in the national service program, and land owning system as well as NUEW organization and its future plan.

In the course of the 3-day event, the participants adopted a number of recommendations and suggestions which would enrich ideas to draft future plan of the Union.

In the closing of the event, the Chairperson of the NUEW, Ms. Leul Gebreab, said that the holding of the celebrations in Sawa Vocational Training and Education Center fully attests to the task being undertaken to bequeath the nation’s cherished values to young females. She also called on government institutions, the People’s Front for Democracy and Justice (PFDJ) and the general public to exert strenuous efforts towards nurturing women agents of change.

The Product of Long Sighted Vision and Committed Effort