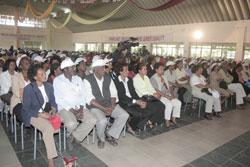 Eritrea celebrated two great events within a month; the 30th anniversary of the National Union of Eritrean Women and the National Confederation of Eritrean Workers. As has been said in many occasions, women possess a very significant position in the history of the Eritrean people. For that reason, the women of Eritrea have been described as the soul of the nation and inspiration to the rest of the world.

From the 29th of November to the second day of December, the National Union of Eritrean Women celebrated their 30th anniversary in Sawa, the national center of education and training. In addition to a two-day symposium and other significant workshops, the anniversary was decorated with various activities that reflected the importance of the occasion.

Hundreds of women from all corners of the country as well as Eritrean women from abroad traveled all the way to Sawa to be a part of this occasion. All the women agreed that the NUEW has been doing its level best to ensure women’s rights, upgrade their participation in education and various other objectives of the union.

The first day of the celebrations was opened on the 29th of December in the presence of H.E President Isaias Afwerki, Mrs. Lu’ul Gebra’ab, Chairwoman of the NUEW, ministers, army commanders, invited guests and all students in Sawa during which different cultural shows and musical performances were staged.

The event was exciting and the spirit of the participants was high; every single song and performance staged was all about women and laden with messages that could enlighten the view of the society at large as regards to gender equality. Indeed, Sawa is a practical example for the women of Eritrea who practically demonstrated their ability to stand equally alongside their male counterparts.

Different participants voiced their views on the importance of holding the event in Sawa and organizing a festive atmosphere for the anniversary; for the significance of the event goes beyond the festivities and merriment to evaluating the present reality and future prospects of gender equality in Eritrea.

As has been mentioned, participants of the conference came from every part of Eritrea as well as from the Diaspora.

Ms. Lemlem Tekeste is an Eritrean woman who came from Riyadh, Saudi Arabia. She is a member of the NUEW in Saudi and as she said her primary reason for coming to Sawa was to ‘be part of this historic event”.

The activities of Eritrean women in general and those that live abroad in particular is unparalleled, especially during the revolutionary struggle. Ms. Lemlem said: “I could say we were very active during the revolution and somehow slacked a little behind afterwards. But of course being a part of this conference taught me a lot and I am looking forward to further reinforcing our activities and bequeath the values of Eritrean women to the young generation”.

Indeed it was a very historic juncture and the place of celebration, which has become the national center of education and training for the youth is an important choice of venue, where the NUEW underlined its commitment to inspire the thousands of female students there who will soon have the responsibility to further enhance women’s participation in all sectors of the economy.

Eritrean women accomplished many things which were considered to be only a man’s task and proved wrong such biased mentality. Their unparalleled contribution in the struggle for Eritrean independence and their active participation in the nation-building process is a clear proof that given the opportunity women can

Ms. Abeba Fekadu is another participant from the commercial bank of Eritrea. She believes that many things have been accomplished so far but a lot more remains ahead to be done. “Being a part of this conference is not just celebrating what has been done before; it is an event where we renew our vow to bequeath our values to our daughters and reinforce our endeavors”.

The NUEW is well coordinated even at an international level. Eritrean women in foreign countries have connections with the head office and undertake their tasks in accordance with the plans of the union.

Mrs. Mebrat Habtu is the head of the union’s branch in Germany who described the even as a venue where all the women inside the country and abroad came together to assess what has been done before and deliberate on plans for the future.
Share FacebookTwitterGoogle+ReddItWhatsAppPinterestEmail

The Product of Long Sighted Vision and Committed Effort