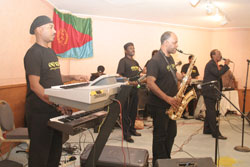 It is the name of an Eritrean band that brought together artists of three generations; starting from the legends of the sixties to today’s young rising international stars and singers. As a matter of fact, it wouldn’t be appropriate to call them rising stars, they are already shining stars. Thanks to Mr. Yared Tesfay, an Eritrean saxophonist from England, the artists were comprised from 12 countries in the Middle East, Europe as well as the United States.

The idea was initiated by the Secretary General of the NCEW, Mr. Tekeste Baire in connection with the celebration of the 30th anniversary, but the search for the group was left to Mr. Yared, who first prepared the concept and then opted to gather personal profiles of all the Eritrean artists who live in the Diaspora.

The search for the band spanning three generations officially began in July this year, which also required musicians to perform music. The whole idea of the program was to highlight the NCEW anniversary as well as that of the NUEW. The bringing together of the band was an exemplary program that promoted exchange of experience as well as passing on the culture and values of  the Eritrean

people to the talented stars.

“The best part is that some of the band didn’t even know each other, or at least they never worked together. We improvised a three-day meeting in Frankfurt before taking off to Eritrea and rehearsed there for two days. The rehearsal again continued for another two days in Eritrea, but I believe the performance went well”, Yared added.

All together, the sound of three generations stayed in Eritrea for three weeks and during that time managed to perform legendary, revolutionary and contemporary artistic works of Eritrea for the NCEW and NUEW 30th anniversary celebrations in Asmara, Masawa and Sawa.

Helen and Sinnit are two young members of the band who live in Italy. They staged their first performance in Eritrea this time with the sound-of-three-generations. Both artists are among the best singers in Italy and signed a number of big contracts with international recording studios. There is no doubt that they rocked the show; coupled with their remarkable educational background, they also inspired young students during their performance in Sawa.

Some of the legendary singers also included, Engineer Asgedom, Tekle Adhanom (Huwket), Federico Imberto, Teame Woldemichael, Almaz Yohannes, Sami Berhane and not to mention great musicians from 12 different countries. There is no need to cite how good the performance was and how splendidly the musicians played for it was beyond imagination.

“Provided the cooperation of concerned authorities, we could have made good use of our young talents abroad who have got international recognition in their respective fields”, Yared continues, “We have around 25 Eritrean young artists who are internationally well known in the music industry and we need to communicate more with them”.

Although the time constraints couldn’t let Yared reach all the Eritrean artists in the Diaspora, he has plans to make a more extensive program in the future. Among the well known Eritrean talents include: Luwam Kiflezgi, a choreographer in the Broadway Musical, New York. She has worked with Rihana, Janet Jackson and teaches around the world.

Eri-am sisters are also another group of Eritrean singers in the United States who qualified for semi finals at the America has got talent show. Haben Abraham, the key singer of the group was tagged as the first voice after Michael Jackson. Mayor of the Renden province announced 22nd of September as the day of the Eri-am sisters for their contribution.

Rita Gabir, a record label assigned reggae singer from Germany as well as Robel Amanuel, with artistic name Afro is another leading singer in Europe. These are only a few from the many Eritrean talents we could be mentioned worldwide.

“This is just a beginning”, is Mr. Yared’s conviction, and of course we will see and hear more of these international talents who will soon be pride of the nation.

First Commencement Of Eritrean Doctors: Landmark Achievement And A Promise For More To Come