First Commencement Of Eritrean Doctors: Landmark Achievement And A Promise For More To Come 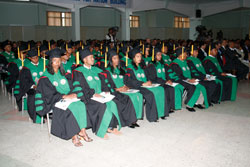 Eritrea has been cited as an example for the achievements it has registered thus far in the health sector, especially, in polio eradication, reduction of mother and child mortality rates, as well as the prevention of the spread of malaria and HIV/AIDS. All the achievements registered so far were realized with only a limited number of workforce. Even though a number of steps have been undertaken as regards to increasing the number of skilled professionals at every level, shortage of relevant human resources still persists. This notwithstanding, Eritrean has recently been able to graduate for the first time 39 doctors trained in the country’s own Orota School of Medicine.

It is to be noted that with the establishment of College of Nursing and Health Technology huge number of health workers have been trained in the past few years. However, despite the impact on the quality of services, the population ratio of health workers remained law.

Though the number of nurses was relatively high as compared to the number of doctors, since there was no institution that provided medical training at doctorate level there was a distinct deficit of

medical doctors. Thus it became imperative to establish a higher institution that provides tertiary and post graduate levels of medical education that would help in the advancement of the health sector.

As a result of committed endeavors of the Eritrean government, last Saturday 5th December 2009, the Orota School of Medicine and Dentistry (OSMD) for the first time since its establishment in 2004, graduated a total of 31 doctors in general medicine and 8 pediatric specialists.
According to the reports of the Ministry of Health (MoH) doctors’ to population ratio in Eritrea has increased from 1: 37, 500 in 1991 to 1:16,667 in 2005. But, currently as the number of health training graduates continues to increase, it will positively affect the quality of health care in Eritrea. And since big things grow from little things this pioneering event would definitely be followed by many other greater achievements.

Also according to the reports from the MoH, it will not be long that Eritrea will exceed the WHO’s minimum recommended figure of 1:10,000 doctors ratio to population.

What is considered as huge achievement is not only that OSMD has graduated its first batch but also, the fact that their qualification has been proved by examiners who came from the internationally recognized universities based in Geneva and Jazeera (Sudan). The examination was given to the two senior batches of the medical students including the graduates of this year. Results of th

e examination have ensured the quality of the given training as per international standards.

During the occasion it was disclosed that in turning this historic achievement into reality, the Ministry of Health, Santa Clara University of the Republic of Cuba and George Washington University have played significant roles. In line with this, the Minister of Heath, Ms. Amna Nurhussien, commended the two universities for their contributions. Noting that their present achievement is but a stepping-stone for further responsibility, Ms. Amna, reminded the graduates to constantly upgrade the skills they have acquired.

A tribute was given to the late former Minister of Health, Mr. Saheh Meky, for the relentless efforts he made for the establishment and development of the school. Thus, the graduates were called “Saleh Meky’s class of 2009” to honor his memory.

OSMD offers a five- year and six- year programs for its dentistry and medicine students respectively. At present the school has a total of 291 students and it is evident that in a few years Eritrea will have the desired number of doctors that would sufficiently meet the demands of the nation.

Sacrificing For Future Generations Is Our Culture