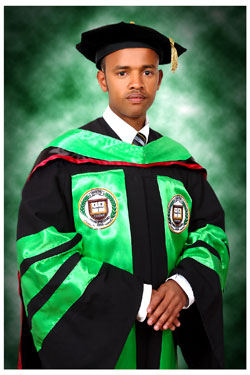 His name is Jaber Mohammed-Idris. He was born in 1984 in a village called Gedged, Shieb sub zone. In 1988, his village was a target of atrocities on civilians by the Derg regime and that is where Jaber lost his younger sister and got a back injury himself. After that, his parents along with him fled to Sahel, part of the liberated areas back then. Recently, Jaber graduated among the 39 students of the Saleh Meki graduate class of 2009, the first batch of graduates from the Orota School of Medicine. Now he is Dr. Jaber Mohammed-Idris and he gave Shabait a brief interview about his experiences and education.

Let’s start by talking about your educational background?

Well, my education basically started after my parents fled to Sahel. I was only four years old during that time, so I was lucky to attend school there. I joined a boarding school called Simud, which has now been changed into a high school. After three years, the whole of Eritrea was liberated and I had to come back home. But there was no access to education besides elementary level there, but thanks to the government I was provided the opportunity to continue my education back in Sahel again at Tsabra boarding school.

How was your academic performance?

I always stood first in all levels of my classes and I scored full point in the national secondary school leaving examinations. That is when I joined the University of Asmara in 2001. At first, I wanted to study computer science but later the new college of medicine was opened and I felt privileged to join the new college.

So studying medicine was your second choice?

I wouldn’t put it that way; I mean of course it is all about choices, but when I first joined the computer science department, it is because I thought that is the best option I had at that time. But when the school of medicine opened at Orota, I said to myself, ‘this is it”.

How did you find the new college of medicine during your first enrollment?

To be frank it was beyond my expectation. All the needed supplies, the curriculum, the teaching human resource as well as the infrastructure were set in place. Besides, being the first batch of students enabled us to benefit more and inspired us more to finish our classes competently.

Do you think the Orota School of Medicine meets international standards?

Definitely, yes. As a matter of fact it even possesses some special qualities that certain western colleges lack. I mean medical students in other countries learn on models, but ours is more interactive and provides the students a lot of exposure. In addition, the college is located within the premises of the Orota National Referral Hospital, and it allows us to get a broader understanding as regards to the country’s health system.

How is the college’s connection with international health institutes and how does it affect you?

To start with, the college was opened and is operating in collaboration with the University of Santa Clara in Cuba. Furthermore, we took board exams as well as maintained relations with Sudanese colleges and one in Geneva. Hence, our license is valid wherever we go. Any candidate who wants to be eligible for the board exam can take it once in a while to update his/her career.

Did you perform well in the medical college?

I graduated in distinction (with honors).

What is the secret behind your success?

There is no secret; it is just a combination of conviction and devotion to your studies. If there is a will there is definitely a way. If I can do it, then any other individual can certainly do it.

So, are you all about studying or you do enjoy other extracurricular activities?

Starting from my childhood I was into athletics, particularly acrobats. Furthermore, I also participated in a number of cultural activities, dramas, general knowledge and debating contests.

Of course I want to join the residence program and specialize in pediatrics. I find it interesting and rewarding to work with kids.

Sacrificing For Future Generations Is Our Culture