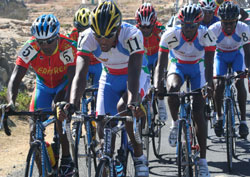 Cycling race was born in Eritrea in 1936. Since then, it has become like a household name. Prior to this, it was being used as a means of transportation by few people. Eritrea is home to lots of great cyclists who devotedly and professionally worked on the country’s most loved sport.Despite the chain of colonial strains, it didn’t take much time for Eritrean riders to dominate Ethiopian cycling activities and represent Ethiopia in different international competitions. The grueling Tour de France was introduced to the world in 1903. Around 33 years later Tour of Eritrea, promoted by the Italian community of Eritrea with the Italian name Giro dell’ Eritrea, first took place in 1946. It was a 570Km tour race that covered 5 stages. Only 12 riders from the total number of 35 participants completed the tour. Barlla Nunzio from A.C Piemonte was the winner of the first Giro dell’Eritrea that included only Italian riders. Tour of Eritrea dates back to 1946, when it was first incepted.

Only Italian colonial cyclists took part in that very first tour race, while the native Eritrean riders were deprived of taking part in the race. It was 55 years later, in 2001, that the race was held for the second time on the occasion of the tenth Independence Anniversary. Former Olympian Giovanni Mazzola played great role in reig-niting the tour after Eritrean independence. From that time on, it is being consecutively held every year as a sports festival.This latest Tour of Eritrea 2009 edition invited 6 national teams in recognition of its acceptance by International Cycling Union (UCI) as one Africa’s internationally recognized tours.

“As Regards Sovereignty All Countries Are Equal”: Minister Ali Abdu