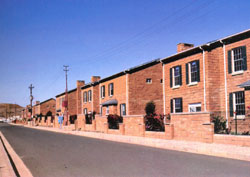 Despite the not very encouraging circumstances in the post independence days some private enterprises had managed to stay afloat. Following independence and with the opportunities that came along with it, these institutions were not only able to flourish but also make significant contributions to the ongoing nation building process. It is not difficult to imagine that the experience these companies had acquired over they years enabled them to develop efficiency and competence.  Debwin Constriction Company is among the aforementioned companies that have thrived successfully and are now actively engaged the nation wide economic development endeavors.

The current structure of Debwin Construction and Development Share Company is a result of a unification of two companies–Debat and Wina–that used to function independently. When these two companies merged in 2007, their combined resources served in developing one unified and competent company that could meet the growing demands in developmental projects.

According to the reports from the company, Debwin has been engaged and specializes in various areas of construction that include constructing housing complexes, schools, health centers, hospitals and factories. The company is also involved in water supply schemes, subsoil investigation, establishment of earthen dams, erecting fiber optic cables, and mobile communication tower centers.

Mr. Haile Woldai, the General Manager of Debwin, pointed out that the company has ventured to remote areas of the country that have previously been out of reach and accomplished many projects while keeping up with harsh climatic challenges and facing many problems which require seasoned skills and devotion.

To keep pace with the developmental progress being registered in every sector in the country, companies like Debwin need to continually upgrade their human and material resources in

order to be able to provide efficient services.  Hence, with the expansion of developmental projects that require enormous potentials of skilled human power, Debat and Wina merged into one so as to keep up with changing times.

The company has skilled technical and professional personnel that include civil engineers, structural engineers, electrical engineers, construction supervisors, surveyors, drafts men, geologists and other higher management staff that are assigned to six department areas of the company. Apart from this the company has been equipped with varied machineries and heavy-duty equipments.

Local construction companies are indeed making due contribution in the over-all developmental activities. However, they need to be self-sufficient as regards the necessary provisions or else they would lag behind and remain incompetent. As part of the efforts to upgrade itself, Debwin has a manufacturing branch that produces concrete blocks, bricks, tiles, concrete pies and pre-cast element, mental and wood works.