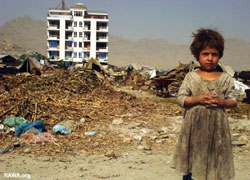 Vast sums of money are being lavished by Western aid agencies on their own officials in Afghanistan at a time when extreme poverty is driving young Afghans to fight for the Taliban. The going rate paid by the Taliban for an attack on a police checkpoint in the west of the country is $4, but foreign consultants in Kabul, who are paid out of overseas aids budgets, can command salaries of $250,000 to $500,000 a year.

The high expenditure on paying, protecting and accommodating Western aid officials in palatial style helps to explain why Afghanistan ranks 174th out of 178th on a UN ranking of countries’ wealth. This is despite a vigorous international aid effort with the US alone spending $31bn since 2002 up to the end of last year.

The high degree of wastage of aid money in Afghanistan has long been an open secret. In 2006, Jean Mazurelle, the then country director of the World Bank, calculated that between 35 % and 40 % of aid was “badly spent”. “The wastage of aid is sky-high,” he said. “There is real looting going on, mainly by private enterprises. It is a scandal.”

The dysfunctional reputation of the US aid effort in Afghanistan is politically crucial because Barack Obama, with strong support from Gordon Brown, has promised that a “civilian surge” of non-military experts will be sent to Afghanistan to strengthen its government and turn the tide against the Taliban. These would number up to 600, including agronomists, economists and legal experts, though Washington admitted this week that it was having difficulty recruiting enough people of the right caliber.

Whole districts of Kabul have already been taken over or rebuilt to accommodate Westerners working for aid agencies or embassies. “I have just rented out this building for $30,000 a month to an aid organization,” said Torialai Bahadery, the director of Property Consulting Afghanistan, which specializes in renting to foreigners. “It was so expensive because it has 24 rooms with en-suite bathrooms as well as armored doors and bullet-proof windows,” he explained, pointing to a picture of a cavernous mansion.

Though 77 per cent of Afghans lack access to clean water, Mr Bahadery said that aid agencies and the foreign contractors who work for them insist that every bedroom should have an en-suite bathroom and this often doubles the cost of accommodation.

In addition to the expensive housing the expatriates in Kabul are invariably protected by high-priced security companies and each house is converted into a fortress. The freedom of movement of foreigners is very limited. “I am not even allowed to go into Kabul’s best hotel” complained one woman working for a foreign government aid organization. She added that to travel to a part of Afghanistan deemed wholly free of Taliban by Afghans, she had to go by helicopter and then be taken to where she wanted to go in an armored vehicle.

There have been numerous attacks on foreigners in Kabul and suicide bombings have been effective from the Taliban’s point of view in driving almost all expatriates into well-defended compounds where living conditions may be luxurious but which are as confining as any prison.
This means that many foreigners sent to Afghanistan to help rebuild the country and the state machinery seldom meet Afghans aside from their drivers and a few Afghans with whom they work. “Risk avoidance is crippling the international aid effort,” said one aid expert in Kabul. “If governments are so worried about risk then they really should not be sending people here and having them work under such restricted conditions.”

The effectiveness of foreign advisers and experts in Iraq is often further reduced by the very short time they stay in the country. “Many people move on after six months,” said one expatriate who did not want to be named. “In addition, some embassy employees receive two weeks off work for every six weeks they are in the country, on top of their usual holidays.”

Some officials working for non-governmental organizations in Afghanistan are themselves troubled by the amount of money which foreign government officials and their aid agencies spend on staff compared to the poverty of the Afghan government.

“I was in Badakhshan province in northern Afghanistan which has a population of 830,000, most of whom depend on farming,” said Matt Waldman, the head of policy and advocacy for Oxfam in Kabul. “The entire budget of the local department of agriculture, irrigation and livestock, which is extremely important for farmers in Badakhshan, is just $40,000. This would be the pay of an expatriate consultant in Kabul for a few months.”

Mr. Waldman, the author of several highly-detailed papers on the failures of aid in Afghanistan, says that a lot of money is put in at the top in Afghanistan but it is siphoned off before it reaches ordinary Afghans at the bottom. He agrees that the problems faced are horrendous in a country which was always poor and has been ruined by 30 years of war. Some 42 % of Afghanistan’s 25 million inhabitants live on less than a dollar a day and life expectancy is only 45 years. Overall literacy rate is just 34 % and 18 % for women. But much of the aid money goes to foreign companies who then subcontract as many as five times with each subcontractor in turn looking for between 10 % and 20 % or more profit before any work is done on the project. The biggest donor in Afghanistan is the US, whose overseas aid department USAID channels nearly half of its aid budget for Afghanistan to five large US contractors.

Examples cited in an Oxfam report include the building of a short road between Kabul city centre and the international airport in 2005 which, after the main US contractor had subcontracted it to an Afghan company, cost $2.4m a kilometer – or four times the average cost of road construction in Afghanistan. Often aid is made conditional on spending it in the donor country.

Another consequence of the use of foreign contractors is that construction has failed to make the impact on unemployment among young Afghans which is crucial if the Taliban is to be defeated. In southern provinces such as Farah, Helmand, Uruzgan and Zabul, up to 70 per cent of Taliban fighters are non-ideological unemployed young men given a gun before each attack and paid a pittance according to a report by the Institute for War and Peace Reporting. By’ using these part-time fighters as cannon-fodder, the Taliban can keep down casualties among its own veteran fighters while inflicting losses on government forces.

Some simple and obvious ways of spending money to benefit Afghans have been neglected. Will Beharrell of the Turquoise Mountain charity, which is encouraging traditional Afghan crafts and reconstruction of part of the old city, says tangible and visible improvements are important. He said: “We went in for rubbish clearing because it is simple and provides employment. We brought the street level down by two meters in some places when we had cleared it away.”

A striking feature of Kabul is that while the main roads are paved, the side streets are often no more than packed earth with high ridges, deep potholes and grey pools of dirty water. New roads have been built between the cities, such as Kabul and Kandahar, but these are often too dangerous to use because of mobile Taliban checkpoints where anybody connected to the central government is killed on the spot.

The international aid programme is particularly important in Afghanistan because the government has few other sources of revenue. Donations from foreign governments make up 90 % of public expenditure. Aid is far more important than in Iraq, where the government has oil revenues. In Afghanistan a policeman’s monthly salary is only $70, which is not enough to live on without taking bribes.

Since the overthrow of the Taliban in 2002 the Afghan government has been trying to run a country in which the physical infrastructure has been destroyed. Kabul is now getting electricity from Uzbekistan but 55 % of Afghans get no electricity at all and just one in 20 get power all day. Money can be distributed more swiftly by the US military but this may not undercut the political support of the Taliban to the degree expected.

Afghans themselves are unenthusiastic about President Obama’s plan for more US military and civilian involvement in Iraq. And the failure of foreign aid to deliver a better life to Afghans also helps explain plummeting support for the Kabul government and its Western allies. Oxfam’s Mr. Waldman believes better-organized aid could still deliver the benefits Afghans hoped for when the Taliban were overthrown in 200 1, but he warns: “It is getting very late in the day to get things right.”

$57 The foreign aid per capita to Afghanistan, compared with $580 per capita in the aftermath of the Bosnian conflict.

$250,000 Typical salary of foreign consultants in Afghanistan, including 35 per cent hardship allowance and 35 per cent danger money. Afghan civil servants typically receive less than $1,000 a year.

40 % Share of international aid budget returned to aid countries in corporate profit and consultant salaries – more than $6bn since 2001.

$7m Daily aid spend in Afghanistan. The daily military spend by the US government is around $100m.

Yohannes Tikabo: Talent To Reckon With