Yohannes Tikabo: Talent To Reckon With 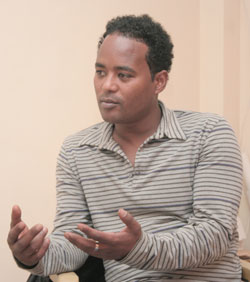 He is better known for his metaphoric song lyrics through which he has inspired countless fans and proved how flexible the Tigrigna language can be. Yohannes Tikabo was born in 1974 in Tesseney from his father, Tikabo Woldemariam, one of the country’s legendary singers of the sixties.
From a young age Yohannes was so musically disposed to the extent that he sneaked out of his home during night time even when there was tight curfew enforced by the Derg regime and listened to music with his elderly neighbors. However, his father never allowed him to play music because he wanted him to focus on his education, which made him write songs and practice playing Kirar-traditional string musical instrument- in secret.

His talent for writing music grew with him in every step of his life even though never performed in public. As a matter of fact he wrote a couple of group ballads for his school and won prizes for his efforts. But the real ground breaking event, which even convinced his father that Yohannes could really sing, was in 1994 in Sawa while doing his national service with the first round batch.

From then onwards, he gradually grew to become one of the most talented Eritrean artists of our time. Yohannes has in various occasions written songs that reflect the true meaning of nationalism, culture and love. He also has quite a knack for doing lyrics quickly.

It was during the TPLF invasion of Eritrea sometime in 1998 and Yohannes along with his fellow nationals was fulfilling the task of defending the nation’s sovereignty in the frontlines. “A cultural troupe came from Asmara to perform a show for the members of the Eritrean Defense Forces and I was among them. But the performers needed backup to cover a span of a few minutes till the show started and that is where I jumped in upon their request”.

That day was a landmark for Yohannes’s career. He came up with a new song where he wrote the lyrics right then and there before coming up to the stage. Amazingly, the song rocked and became a hit among the audience as well as the entire nation. Following that song Yohannes became a prominent artist in Eritrea and presented a number of outstanding songs to the public from time to time.

Having become among the young talented and loved artists of Eritrea, Yohannes won various local awards at different points in time and got the opportunity to travel around the world to perform for Eritrean communities, further honing his skills along the way.  Yohannes believes, “Every step in life is an education and that is where I gather my inspiration and use them to inspire others”.

His power lies in the strength of his lyrics and uniqueness in the thickness of his voice. During his tour around the world, Yohannes came across various international music producers and received a number of requests to work with them in the future. Not only that, Yohannes is also a talent who is striving to master writing lyrics in English. Amazingly he only went as far as 10th grade in school but his reading habits and interaction with people helped him a lot.

“Our ancestors wrote proverbs, but I believe they never had the material to read. It also works the same with me; life is the greatest education for me as I can imagine and I read it. In that case, whatever comes out of me in the form of a song is what I learn” Yohannes says about where he gets his inspiration from.

Earlier this year, Yohannes released his long awaited and much anticipated first album. As a matter of fact he has hundreds of songs written and released tens of masterpieces in singles, but he says: “The public is of course my image. I hope they liked it, but I personally believe that I could have done better”. It was indeed a great work of art and the people soon expect more from him.