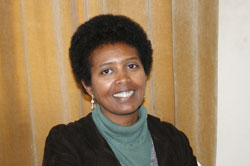 Eritrean cinema halls are always packed with movie-goers during weekends to watch locally made Tigrigna movies. Previously, these cinemas primary hosted foreign productions such as that of Hollywood and Bollywood. The fact that local productions are dominating cinemas is a clear indication of how the film industry is flourishing in the country. However it is not just the quantity but also the quality of films produced that is crucial for the development of any film industry, because films today are not only sources of entertainment but also essential tools of education and communication. Recognizing the impact films can have on young minds, an Eritrean film rating committee was set up to review the quality of locally made films. Shabait interviewed Ms. Ruth Simon, Secretary of Eritrean Film Rating Committee regarding film production in Eritrea and future prospects of the industry.

Can you familiarize us with general structure of the Eritrean film rating committee?

The committee, which was formed upon the request of artists involved in filmmaking in 2006, comprises of nine permanent members and four nonpermanent members. We rate feature films based on 5 main categories, i.e., screenplay, writing, editing, cinematography, makeup and design, and acting.

Could you tell us about your experience in the field of cinematography?

Back in 1979 the EPLF established a cinematographic department in the liberated parts of the country and I was among those who took various cinematography courses given by expatriate instructors. I worked in this department for around ten years before moving   to another section but I never abandoned by interest in cinematographic work. And after independence, I was one of the major fans of local movies. Later when the film rating committee was formed I was nominated as one of the members.

Can you tell us something about film production and cinematography during the armed struggle period?

Prior to the foundation of the cinematography department, films were produced on individual basis who later came together to establish the department. In the beginning we were using 8-millimeter and 16-millimeter films, and gradually VHS cameras were introduced. We worked hard to upgrade our skills and make use of the limited resources available by reading relevant books as well as watching and analyzing films. This helped us a great deal in producing documentary films of commendable quality.

Coming back to the post independence period, how many films have been produced until so far and what is responsibility of the committee in this regard?

Over 200 films are produced up to now. Our mandate is to evaluate and rate the films by given stars. At present we are confined to rating only feature films excluding video clips, documentaries, short and series films. The idea is to maintain a specific standard of films produced in the country. Film producers are required to show us their productions before release. The filmmakers are obliged to put the rating stars they received on their posters, which will help audiences to choose which movie to watch.

What is your impression regarding the films being produced at present?

From my observation a number of good movies are being produced and young talented artists are also coming up. I really admire the talented young artists that are captivating their audiences. Cinematographic skills are also showing progress with the introduction of new technologies and techniques. It is good that our cinemas are now able to show Eritrean films instead of foreign films every weekend.  Nonetheless, although this is good for the development of film industry in Eritrea, audience members also need exposure to quality movies of other cultures.

How many feature films did the committee rate in the past two years?

In 2008 we received eight films while this year the number grew to 16 films.  Only few films have received two stars.

What are some of the common shortcomings identified in the films?

Although young artists’ initiative to make good movies is very encouraging nevertheless there is a distinct lack of training. Besides, script writing is also one of the basic problems that need more attention. Some of the films don’t have a clear message or plot.

What do you think should be done to overcome these problems?

A film or a movie is part of art and a story teller is main core of the film. Thus script writers should have a clear and concerted message with clear aim on their head either to entertain, educate or any other desired message. They should also know how they can convey their massage. Moreover, their first priority should be to produce artistic work rather than commercially oriented films. There may be some films which received only one star and get high reputation, however filmmakers should bear in mind that there exist a huge difference between professionalism and popularity.

Cinematographic industry is a very profitable industry that can boost both artistic work and economic aspect of a nation. Thus we need to strive to reach international standards like other film industries of the world.

Western Mass-Media and the African Continent