Bereket Yemane Shines In the 1st International Tour of Eritrea 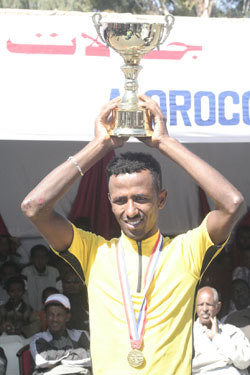 A couple of weeks ago, an international “Tour Eritrea 2009” cycling race was hosted in Eritrea. Cycling race is one of the most favored kinds of sport among Eritreans. Whenever there is a cycling race, spectators come out in crowds and swarm city streets. “Tour Eritrea 2009”, was the first international cycling race in the country, which extended over 717 Kms, making it one of the biggest events in the history of Eritrean sport. One of the many important aspects of the tour was that it highlighted the fact that Eritrea can boast of talented professional cyclists that can successfully compete in any international race. At the end of the competition, Bereket Yemane, a young Eritrean cyclist shined more than any other cyclist. Bereket talked to Shabait about his experience as a cyclist, excerpts follow:

Have you ever thought as a young child that you would one day become one of the best cyclists in the country?

My family and relatives thought that I would one day become a famous soccer player because I was best player from among my friends. At the same time, I was one of those children who spend their Sunday mornings watching cycling races and I was a big fan of Yonas Zekarias. May be this could be the reason I suddenly shifted to cycling completely.

Tell us about your background?

I was born in 1987 and grew up in Edaga-Hamus, Asmara. I started my elementary school in Bahti Meskerem, then attended Hadinet junior school and completed my secondary school in Ibrahim Sultan. Then, I went to Sawa in 19th round with other athletes.

How and when did you start cycling race?

I joined the 4th division race in 2003 when I was 16 years old. I just wanted to give cycling race a try. My father knew that I stood 1st in my first completion and he was so excited that he bought me a bicycle. I stood 1st in the following five competitions. These results encouraged me to fully concentrate on cycling race. I was gradually able to join the first division in 2007.  At this time I am a member of Eritrean National cycling team A and I played for the Asbeco team.

In how many international races have you participated?

I have participated in 5 international cycling races – in the 2006 in Kenya ANOCA, African championship in Cameron in 2007, Tour of Ivory coast in 2008, African Championship in Morocco in 2008 and Tour of Morocco.

What are your impressions about the “Tour Eritrea 2009”?

The race was very challenging. It was beyond my expectation in terms of its efficiency and management, even compared the international races I had previously participated in. Besides, people’s hospitality, administrators’ encouragement and the Commission of Sport’s coordination was quite incredible. The foreign cyclists were also impressed by the overall arrangement. Furthermore, it helped us local cyclists to evaluate our capabilities.

In most parts of the latest race, victory was dominated by Eritrean cyclists, what do you think the reason for this was?

I don’t think the foreign cyclists were unfit for the competition. Some of the cyclists were renowned riders who are recognized in many international races. They had the taken the lead in some stages of the competition especially in plain areas. Thus, there is no doubt about their ability. But may be the weather and the landscape of the country could have been new for them. Besides the Eritrean cyclists were in good condition.

Is there any moment that you consider as the saddest moment in your history of cycling?

Yes, I was preparing to participate in 2007 All African Games hosted in Algeria. Unfortunately I wasn’t lucky enough to go there and I felt very miserable.  And also in 2008 Eritrea champion, victory slipped away from my hand. Daniel Teclehaimanot and I crossed the finishing line almost at the same time, which took more than 30 minutes for the local cycling federation judges to decide who was the winner.

What about your happiest day?

After three months of the All African Games, I got a second chance to participate in African championship in Cameron. I won bronze medal in the competition. I was happy that I could prove my skills.  Plus, I still can’t express my joy over latest victory I have scored in the international “Tour Eritrea 2009”.

Were you expecting to achieve such kind of victory before the game started?

I was determined and prepared to play as best as I could. I believed myself to be in good condition and I was confident that I could score good marks.

To whom do you dedicate the victory you have won?

To my parents, Coach Samson and Michael Bokre for their constant support as well as all my fans.

Western Mass-Media and the African Continent