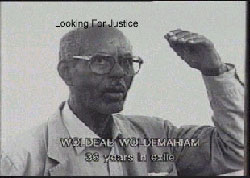 World War II ended with the victory of the Allied Forces of Britain, the US, France and former Soviet Union. After their victory the Allied forces began negotiating about the countries that were under the Italian colonization. Since all the powers were concerned with only protecting their individual interest in the former Italian colonies, they didn’t agree on many the issues. In the case of Eritrea a fact-finding committee was sent to the country to find out what the people wanted. The British Administration in Eritrea also allowed the people to express their feelings in the press and establish various organizations.

The Emergence of Bandits and Chaos in the Country

In early 1946, around 75% of the population of the country wanted independence, a fact which the British colonizers were clearly aware of. Nationals like Woldeab Woldemariam and Sheik Ibrahim Sultan with their colleagues tried to collect signatures of the people who wished for independence and submitted it to the British Administration who had promised independence starting from their early arrival.

These developments alienated the Ethiopian imperial government and its  unionist movement, “Mahber Hibret” from the general public. This created much anxiety among the leaders of “ Mahber Hibret” who then began recruiting bandits to create chaos and confusion among the people. The government in Ethiopia also helped the bandits by providing them with bases and equipping them with the weapons.

On August 28, 1946 on the day of “Eid Al-fetir”, Sudanese British soldiers and some Eritrean Christians from the highlands clashed in a liquor shop and some Sudanese soldiers were badly hurt upon which the soldiers reacted by killing 64 Christian highlanders and wounding others. The British deliberately refrained from taking any actions while such major upheaval took place in the middle of the capital.

After quite some time the chaos in the country seemed to slowdown but both “Mahber Hibret” and the government of Ethiopia were working to use the instability to pursue their own agenda. They start spreading news that the Sudanese were supporting the killing of the Christian Eritreans. Though the people of the Eritrea were doing their best not to create differences among themselves based on religion, the bandits and terrorists from “Mahber Hibret” were looting the belongings of the Moslem Eritreans and killing them which created suspicions and chaos among the society.

While this was happening, Woldeab Woldemariam from “Mahber Eritrea N’ Eritrean” and Gebremeskel Weldu from “Mahber Hibret” agreed that they will not be involved in the initiatives taken in dividing the country but would rather come up with a plan that Eritrea will join Ethiopia peacefully and Eritrea will have of its own autonomous government. The leaders of both organizations agreed to come up with a solution that all members of the two organizations agreed upon and decided to have another conference August 25, 1946 in Bet Giorgis.

In the appointed date leaders of both sides came to the conference but leaders of “Mahber Hibret” came with around 30 bandits and terrorists that began creating disturbance. Soon after the conference commenced, members of “Mahber Hibret” began claiming that a child should not be separated from his/her birth mother, so Eritrea should not be separated from its mother country, Ethiopia. They even tried to threaten members of the conference that supports independence of Eritrea and insulted nationals like Woldeab Woldemariam, Ibrahim Sultan and Dejazmat Hassen and tried to kill them. The Bet Giorgis conference ended without any outcome.

The conference also proved that the government in Ethiopia was against the reconciliation of the two organizations and as a result it removed Gebremeskel Wedlu of “Mahber Hibret” from the leadership and replaced him with Tedla Bairu. After the removal of Gebremeskel “Mahber Hibret” officially become a puppet organization of the government in Ethiopia.

After the failed conference of Bet Girgios, many political parties began emerging in the country and the following text will try to look at some of the parties.

Ibrahim Sultan was the founding father of Al Rabita Al Islamya though Abdulkader Kebire and Dejazmat Hassen Ali had participated in forming this organization. Although the organization was predominantly Islamic, its founding objective was not to spread and preach Islam but to liberate Eritrea. The organization made it clear that the people of Eritrea didn’t want unity with Ethiopia and desired their independence.

Al Rabita Al Islamya was established officially in December 1, 1946 in the town of Keren, during which every Moslem community in the country sent its representatives to the meeting where they elected their leaders. Seid Bekri Almurqani was elected as the president of the organization and Ibrahim Sultan the Secretary General. Religious leaders were also present in the election.

The “Mahber Hibret” was officially formed in Asmara in January 9, 1947 with the majority of the ‘Meslenetat’, ‘Mesafenti’, Abune Markos and few businessmen in the country.

Abune Markos selected three people to be the leaders of the organization. Ra’as Kidanemariam Gebremeskel was elected to be the Honorable President, Dejazmat Beyne Beraki the President and Saleh Kekeya Pasha to be the Vice-President. There were also other 42 people who were selected as members of the leadership and to mention some and their position; Tedla Bairu as the Secretary General, Ahmed Hayoti Vice-secretary, Fitawrari Taha Adem as Auditor, Fitawrari Haregot Abayi as Vice- Auditor.

The main purpose of “Mahber Hibret” was to unite Eritrea with Ethiopia and they began disseminating the information that Eritrea and Ethiopia were one country from the very beginning and Eritrea can’t survive separately from Ethiopia, they even said that Ethiopia was the only country were both Moslems and Christians are treated equally.

“Mahber Eritrea N’Eritrayewian” was officially established in February 18, 1947 in Adi Keih. In the meeting held to declare the organization as an official movement many local elders and community leaders come together from the former Serye and Akeleguzai provinces. Like Al Rabita Al Islamya, this organization also stood for Eritrean independence. It also argued about democracy in the country, and that it wouldn’t accept unity with Ethiopia. “Mahber Eritrea N’Eritrayewian” also agreed to work jointly with Al Rabita Al Islamyia and stated that they have no difference in objectives with Al Rabita Al Islamya.

The Party of Shara Italy

Shara Italy was established in July 1947 and majority of the members were former Italian soldiers and the organization was backed up by Italy. The main objective of the party was Eritrea freedom but they had a pre-condition that stated that before independence the country should be governed by Italy for at least 15 years and this is what separated the party from the others.

After the official declaration of the party, the members elected leaders and administrators. Idris Hassen Naib was elected to be the President, Mehanzel Tesfazgi as Secretary General, Omer Baduri, Zera’a Weldegebraiel and others were elected as advisors.

Political parties began emerging in the country in the aforementioned way but they used to compete among one another to have larger number of members, which later weakened the strength of these parties. The only party propagating for unity with Ethiopia was “Mahber Hibret”.

Before the committee came to Eritrea members of “Mahber Hibret” had created chaos and turmoil in the country. They harassed, beat, and killed members of the other parties in addition to looting their properties. The objective behind such deliberate turmoil was to give a negative image of the Eritrean people for the fact finding mission. But majority of the people of the country were demanding independence.

To highlight some of the acts of turmoil committed by members of the “Mahber Hibret” particularly in the months of June and July of 1946, they tried to assassinate Mr. Woldeab Woldemariam twice and Dejazmat Hassen once.

During its stay in the country, the committee tried to reach many places but didn’t meet the representatives of the people particularly those that were pro independence. The main cause was the bandits backed by “Mahber Hibret” were threatening the representatives and forcing them to return to their homes. The British Administration in the country didn’t try to do anything to solve this problem.

Despite the fact that the commission could not clearly study the reality in the country, it did report that the majority of the people desire independent. But the Allied Forces didn’t consider the commission’s report, since they all were only focused on protecting their respective interests in the country and didn’t agree on making a decision concerning Eritrea. Finally the question of Eritrea was left for United Nations to determine.