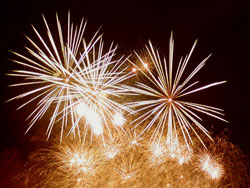 “I didn’t finish shopping for my family and friends, I still have to prepare the house and the food for the event so I really have to hurry and finish the shopping as fast as I can,” were the frustrated words of a friend when I meet her downtown Asmara. I was curious to find out what the big event was and thus I began walking her. Then she asked me: “So what are your plans?” and I start talking about my whole plan for the coming month. I did this because I usually plan my programs for month. But when I began talking about my plans this friend looked at me as if I was some kind of alien from another planet and patiently explained to me that she was asking me about my New Year Eve’s plans and where I was going to spend it. Since I had no plans for the said holiday, she invited me to her house. The house was all covered in white and red, the food was delicious and plenty and every guest received a gift, including me who got a pair of earrings which is one of the reasons that made me write this article.

If we try to look back to the history of New Year, such celebrations date back some 4000 years by the ancient Babylonians. The Babylonians celebrated New Year when the first new moon appeared or first day of spring, as spring was believed to be the beginning of a new season.

To the Creek Indians the ripening of the corn in July or August signified the termination of one year and the beginning of another, and they celebrate the coming of a New Year by draping themselves with new clothes, replacing the old interiors and households.  While the New Year in Dutch and Amsterdam was celebrated with beer and wine. And Ethiopia and Egypt celebrate their New Year in September in addition to what they celebrate in January 1st as a New Year.

While this seems to be the general background of New Year, today many people celebrate the New Year on January 1st and by exchanging gifts, spending the entire evening outside and redecorating their houses. Like my friend here, who tries to celebrate her New Year by decorating her house, exchanging of gifts and all the related fanfare. The only thing that seems absent from her setting was a Santa Clause. Does it have to be like that? And do we have to give a gift to every one who seems to cross our path in a New Year? As for me to whom you buy gifts and what you buy differs and depends on the person’s taste and the relation you have with this particular person. Not to mention the amount of money, time and energy you spend in buying gifts. And does this day deserve to be celebrated with all this fanfare?

Another amazing fact that one commonly observes in the New Year is the endless resolutions. “I will quit smoking, drinking, work double shift, work out to lose some weight, find my soul mate,” are some of the most frequently promised resolutions. And do we really need a New Year to quit a bad habit or change our life style. And can all of these things be accomplished in a limited period of time? Let me ask you something here can we really achieve these things by the end of the year? I don’t think so, why not work on something that we desire and proceed from the outcomes.

Don’t get me wrong here, I am not against celebrations or exchanging gifts or resolutions but do we really need excuses to have resolutions or exchange gifts with loved ones, why not give a gift because you saw it in the window of a shop and thought that it might look great on your friend.

Moreover even if we want to celebrate the coming of a New Year does it have to be in the expected and popular culture, why not do it in our especial way? After all, New Year is a holiday that celebrates the course of time.

And if you are one of those who insist that one has to do something in the New Year, make this year’s resolution that you don’t need a reason to make a resolution or exchange a gift and that you don’t have to follow any kind of routine to celebrate holidays.