History Captured Through A Lens 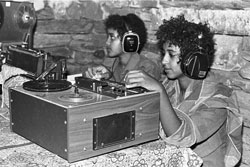 This New Year, Dimtsi Hafash (Voice of the Broad Masses) commemorated its 31st anniversary and its notable achievements since its establishment have been showcased through a photo exhibition that was displayed at The Gallery, Asmara from 31 December 2009 to 5 January 2010. The event simultaneously highlighted the various stages through which Dimtsi Hafash passed through and as well as the achievements of the photograph department in effectively documenting the events and building an invaluable archive.

Though the exhibition was organized in commemoration of the 31st anniversary of Dimtsi Hafash, it at the same time highlighted the achievement of the Information Ministry’s photograph department. The photographs are eternal monuments that tell a story of an indomitable spirit more than carefully embellished words ever could. A short visit to the exhibition would enable anyone to understand the difficult journey towards independence and the challenges Dimtsi Hafash passed through in prevailing over the jamming attempts by the Derg regime and many other difficulties. The collection also contains the progress Dimsti Hafash made all though the post independence years.

Moreover, the exhibition clearly highlighted the importance of photographic documentation and recording. Each of the 100 photographs told its own story, some of courage, some about sacrifice, some of determination, some of bitter hardship and others of a ‘can do’ spirit.

On observing their trails of a past period, some former members of Dimtsi Hafash became nostalgic and began reminiscing about their experiences, both the good and the bad. The Minister of Land, Water and Environment, Mr. Tesfay Gebreselasie, was one of the first members of Dimtsi Hafash staff. He said that the launching of Dimtsi Hafash at a critical juncture during the armed struggle period and with very limited resources had played a very crucial role in presenting the real image of the Eritrean people’s struggle to the world.  “The workload in the hard times and with limited equipment made the aforementioned task very difficult. The unavailability of optimal work atmosphere on its part added di

fficulty to the task, however, the firm determination and faith on the common cause made it possible,” he added.

Presenting materials of historic and critical importance gives a particular value to photography. In this connection Mr. Tesfay explained: “While looking at these images I recall so many things. The aspiration and the desire of the people have now been realized.  While recalling the heavy sacrifices and martyrdom that were paid to capture these photographs and make them ever-living documents, it is also important to give tribute and remember the martyrs who gave their lives to this end.”  He went on to state that taking the exhibition as a starting point a large-scale photographic exhibition that could enhance to the understanding of the younger generations about the hardships that were overcome to achieve independence.

Mr.Girmay Berhie, Director General of the Radio Department in the Ministry of Information, is one of the veteran members of Dimtsi Hafash. With regards the significance of the event he said that in order to truly appreciate the level of development reached at present we should often look back through organizing such shows and see the stages that we passed through so as to easily understand the effort and dedication it took to move up from the basics to the digital level.

According to former members of Dimtsi Hafash who participated in the show, the establishment of Dimtsi Hafash had become a perfect weapon to combat the propaganda efforts of the Derg regime.  Threatened by the new development, the regime actively sought to stifle the voice of Dimtsi Hafash. Moving the broadcasting frequency bands from right to left and vice versa, was the only technical solution to the jamming endeavors of the regime. To prevent from the bombardment attempts the radio was relocated from Fah to Arareb and other transmitters were installed in Arareb in case the main transmitters became a target.

In comparing Dimtsi Hafash in the days of the armed struggle with the one at the present, Mr. Hassen Mohammed Sherif, a former member, said that the difference in technology, programs, and coverage is quite enormous. As regards the photograph exhibition he said that he experienced mixed feelings of loss and joy as memories of the martyred staff members flashed back to his mind.

Another participant, Colonel Tsehaye Berhane, who joined the photograph branch of the EPLF in 1975, puts down his memories as follows: “At that time, there were only two dark rooms; one in Sahel and the other in Baqos located in the environs of Shieb. At that time, since there was lack of professional photographers, freedom fighters from different units within the EPLF were called on to take pictures. We also used to import photo- printing chemicals with the cooperation of former clients we used to know while working as photographers.”

Besides displaying photographs the amplifiers, transmitters, and  an old Toshiba tape recorder that were used in broadcasting as well as the outdate cameras that were used to capture each single event were displayed the gallery. All in all, the photograph exhibition showcased the days of colonization, migration of Eritrean families, surrender of the enemy forces, the EPLF forces digging trenches with simple tools, Eritrea’s historic and tourism sites, cultural diversity and its beauty, the over all developmental activities that have been underway in the post independence period and others.