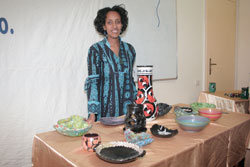 It was an exhibition that drew my interest into pottery. The artistic presentation of clay works and the transformation of mud into priceless ceramics and sculpture is something worth seeing even if you cannot afford to buy one. Her name is Luwam Araya, a 26 year old Eritrean who struggled to become an outstanding potter. The exhibition she displayed in mid December 2009 attracted a number of people including various artists and foreigners.

It doesn’t necessarily require being an art admirer to enjoy the pottery works. Every single design and touch makes one wonder about the ingenuity of how creatively clay can be displayed.  Besides, clay works have a history that dates back as far as the ancient civilizations.

Luwam joined the Mai Tesfa School of ceramics in July 2001 after completing her secondary education at Barka high school. Luwam has always been inclined into sketching, and she really didn’t have the thought of becoming a potter; after all, she didn’t even know there was a school of ceramics. Amazingly, the school was located two blocks from where she lived.

After finding out the whereabouts of the school and paid her first visit however, Luwam new where she belonged. “When I first went to the school, I immediately took the entrance test and qualified to continue for a diploma level study and soon after, I became so passionate about the field”.

It didn’t take Luwam time to apply her sketching talent into pottery. It is the possession of this advantage that made Luwam’s work receive admiration even from the very beginning; she displayed an exhibition during her graduation in April 2009.

In various ethnic groups of Eritrea, the culture of making clay materials is a tradition to furnish and equip a household. Apart from that, many also use the traditional pottery work for decorations and that is where Luwam is trying to specialize by making a streamline into the traditional works.

“Eritrean cultures possess magnificent varieties and styles of pottery. With that inspiration, I also try to combine Byzantine painting style to decorate my finished products”, says Luwam as to where she gets her ideas from. Indeed, a layman could even identify the cultural touches Luwam made in her recent exhibition.

The exhibited pottery materials were a clear combination of modernity and culture as well as ingenuity and talent. Most of the people that participated in the opening event agreed to that point and many gave encouraging tips for the young potter to push forward for further greatness.

Most surprisingly, Luwam is a new mother of a six months old son, but she managed to display an outstanding exhibition. “It is really not easy to become a mother and be devoted to any work of art especially pottery, which requires labor. But with the assistance of my husband I was able to pull it through”. Luwam is definitely an exemplary woman that practically defined that if there is a will there is a way.

History Captured Through A Lens