Expo Grounds: From Prison To Pavilion 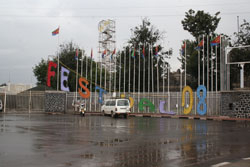 Every year in the month of August, the Expo grounds in Asmara host an annual national festival, where Eritreans from within the country and abroad as well as foreigners come. All Eritreans come together in unison and one heart for the annual pilgrimage and become a part of the cultural shows and various innovative exhibitions displayed all over the grounds.
Before becoming a place of festivities however, Expo was a place where a number of Eritrean nationals were killed and imprisoned only for having any link, either real or imagined with the Eritrean people’s struggle for freedom. Around two decades ago, people passing through the area would feel their blood drain as they hear gunshots that were taking the lives of their loved ones. During those times, no one had the nerve or the guts to pass through the streets of expo let alone getting in and seeing what was happening within the premises.

Constructed around 1968, expo was primarily built for festivities and carnivals, but it didn’t take time for the Derg regime, to turn the place into one of the many dreaded prisons at that time. The classic buildings of outstanding architectural designs were made offices while others became prison cells.

During the initial years of independence, the few lucky ones who made it alive from the prison escorted people to the inside and narrated their memories and how excruciating being a prisoner at Expo was. It is indeed unbelievable for those who served time in the prison to see it with their own eyes and pay a visit to the premises for festive occasions.

From a place of torture, Expo has now become a pavilion of rendezvous where nationals and foreigners await a whole year for the annual festival. All the ethnic groups, talented

inventors and musical troupes prepare to exhibit and perform in honor of the ten days long festival.

The sound of cultural music and the beat of drums replaced the voice of agony and torture. The rhythm of peace and happiness prevailed in the premises which only two decades ago were filled with the sound of inhumane actions.

Thanks to the Government of Eritrea, the place underwent extreme renovation after independence to once again serve as the center of festivities. The infrastructure of the area was in total ruin and the vintage beauty of the buildings inside had already faded, but owing to committed efforts the compound was turned into a place of celebrations and festivities.

This is indeed a legacy of independence. It is like turning swords into ploughshares and telling the young generation the long journey Eritrea has traveled. Besides, every single step one makes inside the expo grounds is a reminder of how proudly Eritreans stand in their own land owing to the blood shed by the heroes and heroines that were martyred both in the battlefields and inside colonial prisons for the same cause.