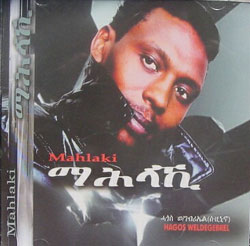 He gained his nick name from one of his popular short comedy films titled ‘Suzinino’.  Although best known for hilarious short comedies, which he writes himself, artist Hagos Woldgebriel (Suzinino) is also a talented singer with a number of popular songs. Following is a brief interview with the gifted writer, singer and actor:

Tell us a little about yourself?

I was born in 1976 and grew up in Alfermayo area in Asmara. I was very much interested in sports as a child and I used to play basketball, volleyball and also swim in the Asmara Swimming Center. My friends and my family expected me to become an important sportsman.

How did you discover your talent for acting?

My introduction to acting career was very sudden.  Back in 1991, I saw people gathered near Cinema while I was returning back to home from Merkato. And I went nearer to find out what was going on and then I found out that those people were queuing to watch a theater drama.  Without thinking twice I went to see the theater. For the first time I watched ‘Mekeret’ drama and I fell in love with acting. From my childhood, I was good at telling jokes to my friends and after I saw the drama I decided to pursue acting. Later on I joined a small drama club.

How do you define art?

Art could perhaps be defined in different ways but its profound meaning can’t be easily comprehended by everyone. I don’t think I am competent enough to explain what art is for me. Art career is like love, can love be defined?

People say that you are quite the comedian in real life as well, is that true?

I think people have a tendency to associate someone with the things he/she does for a living or for something he/she is famous for. If they once identify you as a comedian they will always think of you like that.  It is good to laugh and for me such jokes and comic stories come naturally.

What were you hoping to convey to the public through the comedy ‘Suzinino’?

It is a comedy that has familiarized with the public. The message behind Suzinino is the futility and foolishness of trying to appear someone you are not. The lead character acts if he is rich to win a girl. The play sheds light the consequences of pretending to be someone you are not. We did not make elaborate plans and or select locations to shoot the film but it turned out to be quite a success, we are very lucky.

What kind of a person do you think an artist should be?

An artist should be humble, hardworking and someone who accepts criticism.

What about young people in general?

The same thing applies to them as well.

Expo Grounds: From Prison To Pavilion