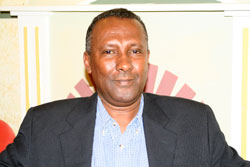 Thanks to distorted images and information spread through the western media, some foreigners have an image of Eritrea as a barren land and war wrecked country, where every citizen lives in starvation and destitution. But the reality could be more different. Ethiopian-Belgian writer, Mohamed Hassan came to Eritrea with an image of a barren land in his head but was quite astonished to find out that the reality was in fact quite different from the commonly held perceptions. Shabait conducted an interview with Mr. Mohammed regarding his impressions during his visit. Excerpts follow:
Q: Let us first start with your background?

A:  I was born and grew up in Addis Ababa, Ethiopia. Now I live in Belgium, and work as a writer, and I am a member of the Labor Party of Belgium. I head a leading magazine in the country-Etude Marxist or Marxist Studies-, which is published every two months, and covers various issues on women, workers, environment and others. I also write as a contributor in the weekly Belgian magazine, Solidaire. Moreover, I had published a book about Belgian nationality, Islamic origins, and another book about the recent US invasion of Iraq.

Q: As this is your first visit to Eritrea, what were your expectations about the country and what did you find when you actually saw the country?

A: Since I was born and grew up in Ethiopia, I have always known about Eritrea. My expectations about the country were like that of many other first-time visitors, which is that Eritrea is a burden to Ethiopia and Ethiopia has to feed Eritrea. There is no greenery or agriculture in Eritrea, the government in the country is oppressing the people and there is no democracy in the country and all this was due to the propaganda that was inculcated in us Ethiopians starting from an early age. When I came to Eritrea what I witnessed was quiet the contrary, it is a small country inhabited by good people, who have fought for their independence for thirty years and are recovering and rebuilding what was left of the war. The cities are clean, the roads and transportation services are remarkable and the general condition of the population in comparison with other African countries is much better in terms of health services, education and potable water supply and other basic services. Despite being a multi-cultural community, the Eritrean people are quite in tune with each other. Even the young people are multi-lingual. The harmony among the Eritrean people is evident even in the children playing in groups.
But what really impressed me about the Eritrean people is that no one seems to hold any grudge against Ethiopia despite the troubled history between both countries. I thought that after the 1998-2000 war and the continued propaganda by the TPLF regime, Eritreans would harbor some animosity but I was wrong. As I went about my daily activities I used Amharic language and no one seemed to be bothered about it. And whether you are Ethiopian, Japanese or be any stranger the people will treat you well.

Q: How would you describe Eritrea’s development achievements in the past 18 years as compared to other African countries?

A: The EPLF had clear political, economic and social programs and strategies starting from the times of the armed struggle period. Following independence, Eritrea pursued a policy of self-reliance, which enabled it to realize many of the development programs. Compared to many African countries Eritrea has a rich and resourceful community while many African countries have a rich country with a very poor population. And this is mainly due to irresponsible and corrupt leadership in many African countries.

Q: What is your opinion about Eritrea’s media and its role in creating awareness among the people of the Horn?

A:  For several reasons the people of the Horn of Africa share similar culture, tradition and beliefs and since the media in the other countries in the region do not represent the truth to their population, I would say the Eritrea media can play a great role in creating awareness owing the diversity of the languages it employs in disseminating information.

A: Though I met the President 20 years ago, in 1982, in Brussels but did not get to know him well. When I spoke with him this time I found him to be a direct and honest man. I was impressed to find out that he lives like any ordinary citizen and walks around the city without many guards. As I talked with him I felt our conversation was like a discussion between comrades and not an interview with a head of state. In many countries, even in those that claim to be democratic, to have an interview with the President, the questions should be submitted to Information Minister before weeks and definitely some have to be omitted. I found nothing like that here.

Q: In your interview with the President you said “As an Ethiopian and African, when I see what Eritrea has achieved in the past 18 years, I really get jealous,” what did you mean by that?

A:  I would like my country, Ethiopia, to have the kind of peace and stability Eritrea is enjoying now. African in general and Ethiopia in particular is rich in natural resources but its people are poor, so I would naturally be jealous of a young nation that can provide education, potable water, health services and transportation to its entire population. And if there had been a good leadership that provides those things to the population why would I even want to live in diaspora?  I am on a self-imposed exile due to the leadership in the country.

A:  Eritrea is a very nice country and I would say anyone who is interested should see for himself before dismissing it as a war-torn and barren land as propagated by propaganda media. And to Eritreans all over the world, I would like to tell them to return to their country and contribute their part in rebuilding their country.

A Young Coach In Pursuit Of Training Best Players