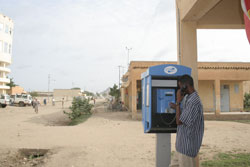 In 2009, the corporation constructed new telecommunication stations in Emba -Tarika, Barentu, Tessenei, AdiKeih, Afabet, Rora-Mensae, and Goluj. In addition to the stations, Eri-Tel also introduced solar energy based power in the areas which enabled the inhabitants to become beneficiaries of a 24-hours telecommunication services.

Recently, Eri-Tel held its annual assessment meeting at Expo hall, during which it was disclosed that the corporation had registered a number of commendable achievements in the year 2009. For instance, in Barentu, Tessenei and AdiKeih, in addition to the Global System for Mobile Communications (GSM), solar energy equipment have also been planted to further enhance the Public Service Telephone Network (PSTN) to 24 hours. Wireless Code Division Multiple Access (CDMA) telephone services have also began to function in the Central, Southern, and Northern Red Sea regions.
In 2009 alone a total of 274 public phones have been installed in Asmara, Tessenei, Barentu, Adikeih, Assab, Ghinda’e and Mendefera. And beginning from August 2009 internet bandwidth has been extended from 24/7 to 30/9 Mbps.

As a result of these collective achievements, the number of GSM, PSTN, CDMA, internet lease line, and public phone clients have altogether showed a total increase of 27 % from that of the previous year. The introduction of prepaid and postpaid CDMA cards in Asmara, Dubaruwa, Massawa and its environs, the 50% reduction in the price for Subscriber Identity Module card (SIM-card) were also the major achievements of 2009.
Though the accomplishments that have been undertaken are quite remarkable there are projects that have been transferred from 2009 to 2010 that include the construction of a new station in Bisha, and the renovation of Eri-Tel’s office in Massawa. There is also a plan to extend Asymmetric Digital Subscriber line (ADSL) technology so as to facilitate on line billing systems, and to give internet accesses using the CDMA.

According the reports from the corporation there are numerous projects to be implemented in 2010. In the Central region, Base Transceiver Stations (BTSs) will be installed as a substitution to the previous ones that have been functioning for the last five years. Besides this, additional Base Station Controller (BSC) and Operation and Maintenance Center (OMCR) will be set up and are expected to reduce the existing concentration of calls. The establishment of 2G and 3G microwave relay stations is also part of the projects that will be implemented in 2010. Moreover, plans have been charted out for the erection of GSM and BTS stations in Bisha, Foro, Abasalama and Dahalak Islands, as well as in the free trade zone and in Massawa international airport. Preparations for introducing internet services in remote areas of the country have also been completed.
Eri-Tel has also increased its annual income by 23% this year, indicating that  if the corporation strives to distribute all kinds of electronic communication systems through out the nation, including the remote areas, it would not only provide more efficient services but would also generate more income.